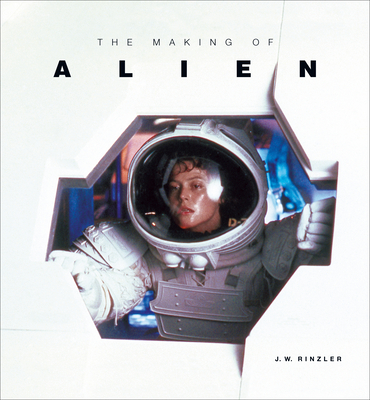 A comprehensive and definitive volume telling the complete story of how Alien was made, featuring new interviews with Ridley Scott and other production crew, and including many rarely-seen photos and illustrations from the Fox archives.

In 1979 a movie legend was born, as Twentieth Century-Fox and director Ridley Scott unleashed Alien - and gave audiences around the world the scare of their lives.

To celebrate the movie's fortieth anniversary, author J.W. Rinzler (The Making of Star Wars) tells the whole fascinating story of how Alien evolved from a simple idea in the mind of writer Dan O'Bannon into one of the most memorable sci-fi horror thrillers of all time.

With brand new interviews with Ridley Scott and other key members of the original production crew, and featuring many never-before-seen photographs and artworks from the archives, The Making of Alien is the definitive work on this masterpiece of popular cinema.

J.W. Rinzler was born in Lakewood, New Jersey; grew up in Manhattan/NYC and Berkeley, CA. J W Rinzler fell in love with old monster films, such as Dracula and Frankenstein, as well as Robin Hood and other adventure movies.

Former executive editor for 15 years at Lucasfilm, Rinzler wrote and directed an animated short 'Riddle of the Black Cat', which was shown at numerous film festivals, including the Montreal World Film Festival. His adaptation of George Lucas's original rough draft became 'The Star Wars' graphic novel and was a #1 New York Times best-seller.

“Rinzler does a fine job of showing why, exactly, Alien became one of cinema’s greatest creations” - The Film Stage

“completely enthralling...For fans of the film and the franchise, you couldn’t ask for more for this year’s 40th anniversary of Alien.” - Borg.com

“a jaw-dropper of a book, a must-own for Alien fans that's positively overflowing with excellent artwork, new interviews, script excerpts, and a whole bunch of behind-the-scenes photos I'd never seen before” - Birth.Movies.Death

“a gorgeous hardcover book that follows the making of the film from its inception in the mind of writer Dan O’Bannon to the mark it has left on the world...I think it’s safe to say that this book is a must-have for fans of the Alien franchise” - Dread Central

“J.W. Rinzler has previously set the bar for "The Making of" genre. By the end of this book he's becoming the platinum standard. This is easily the most well done and comprehensive look at Alien fans have ever seen.” 10/10 - Adventures in Poor Taste

“author J.W. Rinzler brilliantly guides us through the long and fascinating origins of this unforgettable film by Ridley Scott” - Dead Enertainment

“an extraordinary revelation of a film we thought we already knew.” - Film School Rejects

“an exhaustive volume, one that works on two levels...you can page through, just soaking in the extraordinary illustrations and concept art from Ron Cobb, Chris Foss, H.R. Giger, and Scott himself. It’s also a book that provides some phenomenal detail into the story of the film’s production, and how it fit into the larger picture of cinema.” - The Verge

“While I can’t recommend The Making of Alien highly enough to fans of the movie, it’s also an interesting look into the creative process, shedding light on the creation of one of the greatest films of all time. Rinzler and Titan have released a top-quality book that should interest any fan of horror, science fiction, or good film in general” - Ravenous Monster

"An engaging tribute to a widely respected film, but also a treat for fans of books about moviemaking." - Booklist

“Rinzler does a fine job of showing why, exactly, Alien became one of cinema’s greatest creations” - The Film Stage