Living in the End Times (Paperback) 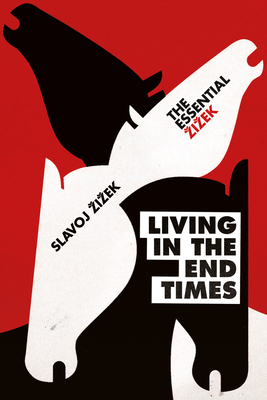 There should no longer be any doubt: global capitalism is fast approaching its terminal crisis. Slavoj Žižek has identified the four horsemen of this coming apocalypse: the worldwide ecological crisis; imbalances within the economic system; the biogenetic revolution; and exploding social divisions and ruptures. But, he asks, if the end of capitalism seems to many like the end of the world, how is it possible for Western society to face up to the end times? In a major new analysis of our global situation, Žižek argues that our collective responses to economic Armageddon correspond to the stages of grief: ideological denial, explosions of anger and attempts at bargaining, followed by depression and withdrawal.

After passing through this zero-point, we can begin to perceive the crisis as a chance for a new beginning. Or, as Mao Zedong might have put it, “There is great disorder under heaven, the situation is excellent.” Slavoj Žižek shows the cultural and political forms of these stages of ideological avoidance and political protest, from New Age obscurantism to violent religious fundamentalism. Concluding with a compelling argument for the return of a Marxian critique of political economy, Žižek also divines the wellsprings of a potentially communist culture—from literary utopias like Kafka’s community of mice to the collective of freak outcasts in the TV series Heroes.

Slavoj Žižek is a Slovenian philosopher and cultural critic. He is a professor at the European Graduate School, International Director of the Birkbeck Institute for the Humanities, Birkbeck College, University of London, and a senior researcher at the Institute of Sociology, University of Ljubljana, Slovenia. His books include Living in the End Times, First as Tragedy, Then as Farce, In Defense of Lost Causes, four volumes of the Essential Žižek, and many more.

“The result is, as usual, a compendium of long passages of fierce brilliance . . . Žižek is consistently penetrating.”
—Steven Poole, Guardian

“The most dangerous philosopher in the West.”
—Adam Kirsch, The New Republic

“Such passion, in a man whose work forms a shaky, cartoon rope-bridge between the minutiae of popular culture and the big abstract problems of existence, is invigorating, entertaining and expanding enquiring minds around the world.”
—Helen Brown, Daily Telegraph