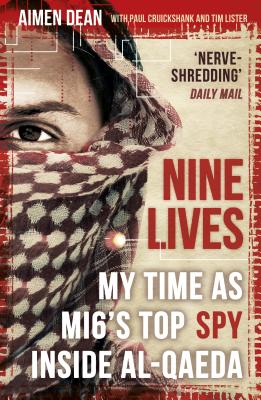 As one of al-Qaeda’s most respected bomb-makers, Aimen Dean rubbed shoulders with the mastermind of the 9/11 attacks and swore allegiance to Osama bin Laden.

As a double agent at the heart of al-Qaeda’s chemical weapons programme, he foiled attacks on civilians and saved countless lives, brushing with death so often that his handlers began to call him their spy with nine lives.

This is the story of how a young Muslim, determined to defend his faith, found himself fighting on the wrong side – and his fateful decision to work undercover for his sworn enemy. From the killing fields of Bosnia to the training camps of Afghanistan, from running money and equipment in Britain to dodging barrel bombs in Syria, we discover what life is like inside the global jihad, and what it will take to stop it once and for all.

Paul Cruickshank is CNN’s Terrorism Analyst and Editor-in-Chief of CTC Sentinel, the flagship publication of the Combating Terrorism Center at West Point. Tim Lister is a British producer and reporter who has covered international news for the BBC and CNN for more than thirty years. They wrote the international bestseller Agent Storm with Morten Storm.

‘It is rare that Western secret services place an agent within an organisation such as al-Qaida… It is unprecedented that any such individual publishes a detailed memoir of more than a decade of his activity at very nearly the highest possible levels of Islamist militancy.’
— Observer

‘A major contribution to the literature of espionage, and a rare book to say something original about contemporary jihadism.’
— Wall Street Journal

‘An endlessly fascinating portrayal of al-Qaeda and the jihadist movement before and after 9/11…a thrill ride of an autobiography…Nine Lives is also an exquisite portrait of what it is like to be a secret agent caught in limbo between the West and the Middle East… A must-read for anyone who seriously wants to end the scourge of jihadi terrorism in the West and the East.’
— New York Journal of Books

‘A compelling and invaluable account of life inside al-Qaeda through the eyes of a first-rate spy. This unique narrative throws open the shutters of the secret world of terror.’
— Lawrence Wright, author of The Looming Tower

‘Aimen Dean has been on most of the major jihadist battlefields of the past three decades and met many of the most significant figures… Not only a gripping page-turner, but also an extraordinary contemporary history of the global terror threat.’
— Raffaello Pantucci, author of “We Love Death As You Love Life”: Britain’s Suburban Terrorists

‘This captivating real-life spy-thriller is a must-read to understand the enduring threat of global terror. It provides a fascinating account of one of the most lethal terrorist groups, from the unique perspective of a courageous double agent – an excellent read all round.’
— Ali Soufan, former FBI Special Agent and author of Anatomy of Terror and The Black Banners

‘One of the most extraordinary, captivating and insightful accounts of involvement in the violent global jihad. For many years, Aimen Dean risked his life time and time again, penetrated the leadership of al-Qaeda and saved many lives. Britain owes him a debt of gratitude. A seminal book.’
— Richard Walton, Head of Counter Terrorism Command (SO15), New Scotland Yard, 2011–2016

‘An incisive history of the war on terrorism and a riveting true-life thriller… An important book that sheds new light on al-Qaeda’s violent trajectory and its continued, stubborn resilience.’
— Professor Bruce Hoffman, Georgetown University, and author of Inside Terrorism

‘A must-read for anyone interested in the inside story of the last two decades of the so-called War on Terror. This book defies easy classification. Is it an insightful book on intelligence tradecraft? Certainly so. Is it an important primer on the evolution of radical jihadism? Without question. Is it a key resource for our understanding of counter-terrorism policy and practice in the twenty-first century? Absolutely.’
— Dr Vince Houghton, Historian and Curator, International Spy Museum, Washington, DC

‘Nine Lives provides a stunning inside account of the making of a senior al-Qaeda operative, who trained with the organization’s master bomb-maker and WMD-specialist, who turned into an MI6 spy, foiling terrorist plots and uncovering al-Qaeda networks. The story of Aimen Dean is as close as you’ll ever get to the real thing. The book provides unique intelligence insights into the inner workings of al-Qaeda before and after 9/11. It also reveals how MI6 used him as one of its most valuable intelligence weapons in the global war on terrorism.’
— Dr Magnus Ranstorp, Research Director, Centre for Asymmetric Threat Studies, Swedish Defence University, and Quality Manager, EU Radicalisation Awareness Network, Centre of Excellence

‘This is the most fascinating book about al-Qaeda I’ve read in a long time. It is a realistic and down-to earth account of al-Qaeda’s chemical weapons programme, told by one of its insiders. It’s a must-read for everyone who wants to understand al-Qaeda and the evolution of international terrorism.’
— Anne Stenersen, author of Al-Qaida in Afghanistan and Al-Qaida’s Quest for Weapons of Mass Destruction