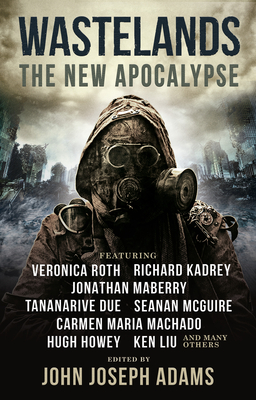 The brilliant new post-apocalyptic collection by master anthologist John Joseph Adams, for the first time including new stories by the edgiest modern writers.

Continuing the tradition that made the earlier volumes definitive, this collection also will feature reprints of the best post-apocalyptic works of recent times. The who's who of short fiction will include Catherynne M. Valente, Ken Liu, Carrie Vaughn, Nisi Shawl, Timothy Mudie, Sofia Samatar, and Shaenon K. Garrity. Representing a diverse range of philosophies and points of view, WASTELANDS: THE NEW APOCALYPSE will be as essential as the original anthologies.

JOHN JOSEPH ADAMS serves as series editor of Best American Science Fiction and Fantasy and is the editor of more than thirty anthologies, including Wastelands and The Living Dead. Recent books include A People's Future of the United States, Cosmic Powers, Press Start to Play, Loosed Upon the World, and The Apocalypse Triptych. Called "the reigning king of the anthology world" by Barnes & Noble, John is a two-time winner of the Hugo Award (for which he has been a finalist twelve times) and an eight-time World Fantasy Award finalist. He is also the editor of John Joseph Adams Books (an imprint of Houghton Mifflin Harcourt) and the digital magazines Lightspeed and Nightmare, and is a producer for WIRED's Geek's Guide to the Galaxy podcast. Find him online at johnjosephadams.com and @johnjosephadams.

“John Joseph Adams has curated an impressive selection of science fiction that is truly forward-thinking, from some of the most famous names in the business...Wastelands: The New Apocalypse has re-sparked my love for sf&f anthologies” - The Frumious Consortium

“These stories are entertaining and action-packed; clever, creative, and sometimes even a little bit funny. It may be ironic to use the worst disasters we can imagine as a platform for escapism, but, as the Wastelands series shows, the apocalypse is one hell of an opportunity.” - Tor.com

“As the editor of several apocalypse-themed anthologies...Adams has selected some of the best apocalyptic fiction to found anywhere. His brand-new follow-on in the Wastelands series, The New Apocalypse, continues this tradition.” - Kirkus Reviews

“Titan and Adams have masterfully crafted a compendium of truly amazing tales that will shock you, thrill you, chill you, and leave you feeling surprisingly good about, of all things, the end of the world.” - The Bookish Beth