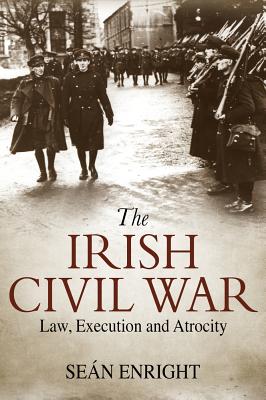 During the Irish Civil War, eighty-three prisoners were executed after trial by military court. The Irish Civil War: Law, Execution and Atrocity explores the pressures that drove the provisional government to try prisoners for arms offences by military courts, and how, at a time of great crisis, the rule of law evaporated and the new policy morphed into reprisal executions.

Seán Enright was called to the Bar at Middle Temple in 1982 and at the Four Courts in 1993. He practised at the Bar in London for many years and is now a Circuit Judge. He is the author of The Trial of Civilians by Military Courts: Ireland 1921 (2012), Easter Rising 1916: The Trials (2014), After the Rising: Soldiers, Lawyers and Trials of the Irish Revolution (2016), and The Irish Civil War: Law, Execution and Atrocity (2019).

"This book will be popular with both the general reader and the specialist, and is sure to stir up a debate two years ahead of the centenaries of its events." —Joe Culley, History Ireland

"It is to Enright’s enormous credit that, in their absence, he has been able to piece so much back together. Until recently, the two main parties in southern Ireland, Fianna Fáil and the heirs of the 1922-1932 government, Fine Gael, based themselves on the sides taken in the civil war, not on any clear ideological differences. The bitterness of that conflict echoed down the 20th century, long after it had finished. Such executions and reprisal killings continue, of course, but post-1945 they are now criminal offences under international law. This book looks back before that time, and it is a shocking read almost a century on." —Chris Bambery, Military History