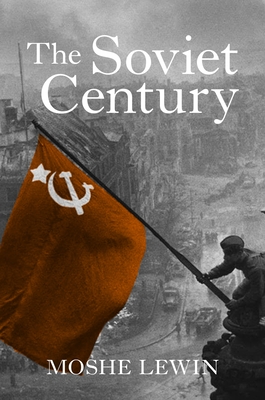 On the centenary of the Russian Revolution, a classic history of the Soviet era, from 1917 to its fall

One hundred years after the Russian Revolution the Soviet Union remains the most extraordinary, yet tragic, attempt to create a society beyond capitalism. Yet its history was one that for a long time proved impossible to write.

In The Soviet Century, Moshe Lewin follows this history in all its complexity, guiding us through the inner workings of a system which is still barely understood. In the process he overturns widely held beliefs about the USSR’s leaders, the State-Party system and the powerful Soviet bureaucracy.

Departing from a simple linear history, The Soviet Century traces all the continuities and ruptures that led from the founding revolution of October 1917 to the final collapse of the late 1980s and early 1990s, passing through the Stalinist dictatorship, the impossible reforms of the Khrushchev years and the glasnost and perestroika policies of Gorbachev.

Moshe Lewin was a hugely respected historian of the Soviet Union. Professor of Soviet Studies at the University of Pennsylvania, his books include Stalinism and Nazism: Dictatorships in Comparison and The Making of the Soviet System: Essays in the Social History of Interwar Russia.

“Probably no other Western historian of the USSR combines Moshe Lewin’s personal experience of living with Russians from Stalin’s day—as a young wartime soldier—to the post-communist era, with so profound a familiarity with the archives and the literature of the Soviet era. His reflections on the ‘Soviet Century’ are an important contribution to emancipating Soviet history from the ideological heritage of the last century and should be essential reading for all who wish to understand it.”
—Eric Hobsbawm

“Rich in its insights and original in its perspectives, Moshe Lewin’s superb new book provides a master-class in understanding the structures and intricate workings of the Soviet system.”
—Ian Kershaw

“The Soviet Century is an original and stimulating survey, packed with insights and information, by an outstanding historian. It will enlighten both specialists and general readers about a crucial aspect of the modern world.”
—R. W. Davies

“Moshe Lewin … has written a book of gripping scholarship. In The Soviet Century he shows that the world cannot turn its back on Russia's past, and neither Russians nor anyone else should try to do so. As Lewin writes, the Soviet system may be dead and buried but it lives on in Russia's search for a national identity. This search needs to be based on the truth, good or bad, about what happened under Communism. The Soviet Century is an excellent place to look for it.”
—Mark Harrison

“With the benefit of hindsight and new archival sources, he strips the Stalin and subsequent Khrushchev–Brezhnev eras down to their defining nature. Much more than just an acute, resonant echo of the past.”
—Foreign Affairs

“A pioneer in the historical study of the Soviet Union, Moshe Lewin brought to Soviet historiography his personal experiences, political convictions, and deep analytical insights into the Leninist and Stalinist revolutions … a master at original conceptualizations of the evolution of the Soviet experiment.”
—Ronald Grigor Suny, History Workshop Journal