A Short History of the Italian Renaissance (Short Histories) (Hardcover) 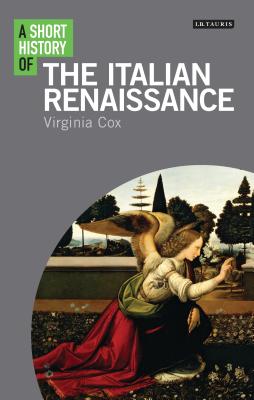 By Virginia Cox
Unavailable, our apologies.
Out of Print

The extraordinary creative energy of Renaissance Italy lies at the root of modern Western culture. In her elegant new introduction, Virginia Cox offers a fresh vision of this iconic moment in European cultural history, when - between the fourteenth and sixteenth centuries - Italy led the world in painting, building, science and literature. Her book explores key artistic, literary and intellectual developments, but also histories of food and fashion, map-making, exploration and anatomy. Alongside towering figures such as Leonardo da Vinci, Michelangelo, Raphael, Petrarch, Machiavelli and Isabella d'Este, Cox reveals a cast of lesser-known protagonists including printers, travel writers, actresses, courtesans, explorers, inventors and even celebrity chefs. At the same time, Italy's rich regional diversity is emphasised; in addition to the great artistic capitals of Florence, Rome and Venice, smaller but cutting-edge centres such as Ferrara, Mantua, Bologna, Urbino and Siena are given their due.

As the author demonstrates, women played a far more prominent role in this exhilarating resurgence than was recognized until very recently - both as patrons of art and literature and as creative artists themselves. 'Renaissance woman', she boldly argues, is as important a legacy as 'Renaissance man'.

Virginia Cox is Professor of Italian at New York University. She is the author of The Prodigious Muse: Women's Writing in Counter-Reformation Italy, Women's Writing in Italy, 1400-1650 and The Renaissance Dialogue: Literary Dialogue in its Social and Political Contexts, Castiglione to Galileo.