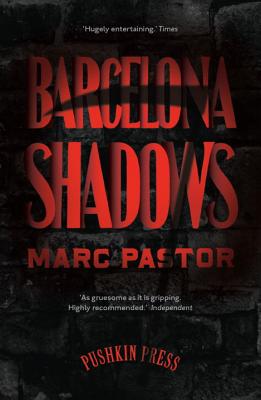 In 1917, Barcelona's infamous Raval district is alive with outlandish rumours. A monster is abducting and murdering young children. The police are either powerless to prevent his terrible crimes,or indifferent to them, since they concern only the sons and daughters of prostitutes. But Inspector Moisès Corvo is determined to stop the outrages, and punish their perpetrator. His inquiries take him on a tour of the Catalan capital,through slum, high-class brothel and casino, and end in a stomach-turning revelation.

Marc Pastor (b. 1977) studied criminology and crime policy, and works as a crime-scene investigator in Barcelona. He is the author of four novels: Montecristo, Barcelona Shadows, awarded the Crims de Tinta prize in 2008, L'any de la plaga and Bioko. Richly atmospheric, his work spans a range of genres, from Sci Fi to Gothic via the adventure novel. Barcelona Shadows is first book published in English.

"'Barcelona Shadows' emerges as a winning blend of moody atmospherics and supercharged thrills, and eventually resembles Pastor’s description of the dastardly Enriqueta: 'captivating and horrifying all at the same time.'" -  Malcolm Forbes,The Star Tribune


"Pastor’s humble but effective storytelling innovation is to have Death narrate the story…  It sounds gimmicky, but in Pastor’s able hands (neatly translated by Mara Faye Lethem) it adds a fateful dimension... Pastor is also skilled at creating brief, crisp scenes that get into the minds not only of his detective but of two captive little girls, and other characters as well. He’s grittily insightful into the psychology of a city under stress… [a] dark, fast-moving tale." — Blogcritics

"As gruesome as it is gripping... the writing is extraordinarily vivid... Highly recommended." - Independent

"Our creepy storyteller is as compelling as the murderess whose monstrous crimes he chronicles... Pastor makes it all breathe effortlessly." - Financial Times

"Brims with the stuff of a classic adventure novel passed through the sieve of post-modernity, and which captivates the reader from the very start. Essential reading for all who love literature." - Sebastià Bennassar, Diari de Mallorca

"Blends intrigue, terror and police investigation from an original narrative perspective and with a recreation of the period that evokes the gothic environs of Poe and Conan Doyle." - Rosa Maria Piñol, La Vanguardia

"Mesmerizing... the writing is brilliant, a thing of beauty." - Books, Bones and Buffy

"A terrifying read, but a bloody good one too." - Crime Squad