Red Love: The Story of an East German Family (Paperback) 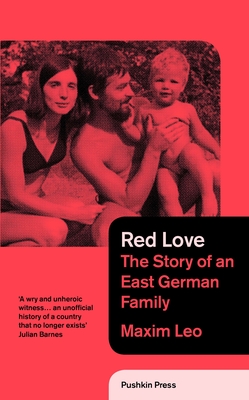 Now, married with two children and the Wall a distant memory, Maxim decides to find the answers to the questions he couldn't ask. Why did his parents, once passionately in love, grow apart? Why did his father become so angry, and his mother quit her career in journalism? And why did his grandfather Gerhard, the Socialist war hero, turn into a stranger? The story he unearths is, like his country's past, one of hopes, lies, cruelties, betrayals but also love. In Red Love he captures, with warmth and unflinching honesty, why so many dreamed the GDR would be a new world and why, in the end, it fell apart.
Growing up in East Berlin, Maxim Leo knew not to ask questions. All he knew was that his rebellious parents, Wolf and Anne, with their dyed hair, leather jackets and insistence he call them by their first names, were a bit embarrassing. That there were some places you couldn't play; certain things you didn't say.

Maxim Leo was born in 1970 in East Berlin. He studied Political Science at the Free University in Berlin and at the Institut d'Etudes Politiques de Paris. Since 1997 he is Editor of the Berliner Zeitung. In 2002 he was nominated for the Egon-Erwin-Kisch Prize, and in the same year won the German-French Journalism Prize. He won the Theodor Wolff Prize in 2006. He lives in Berlin. The author lives in Berlin, Germany.

"Absolutely enthralling . . . Mr. Leo vividly evokes the second-rate nightmare of repression, intolerance and low-level menace dramatized in the film The Lives of Others.” -- The New York Times Book Review

"In this winner of the European Book Prize, Leo not only produces a moving family memoir, but also a probing exploration of the human need to believe and belong." -- Kirkus Reviews

"Leo’s experience as a journalist shines throughout the memoir; he is at times distant and objective but also compassionate and inquisitive about his own history. His family’s story, spanning from both sides of his parents to his grandparents and their families, is extraordinarily compelling. . . Translator Shaun Whiteside marvelously captures Leo’s distinct voice; the writing is clear and poetic. . . Leo’s memoir humanizes this history and offers readers a glimpse into a different past." -- The New York Daily News

"Maxim Leo has produced a lucid, dispassionate, and altogether extraordinary account of three generations of his German family as Big History kicked them around and they, for the most part, made sterling attempts to kick back." -- The Los Angeles Review of Books

"Beautiful and supremely touching… Leo’s memoir was the winner of the European Book Prize, and deservedly so… It is a moving saga of people who love one another but are doomed never to get along, and it is also an unbearably poignant description of a world that no longer exists." – Keith Lowe, Sunday Telegraph Book of the Week, 5-star review

“[Red Love] gives us extraordinary, intimate access to East Germany when the state was not just in the family apartment but locked within the minds and aspirations of all its citizens.” – Sunday Telegraph, Books of the Year

“A family narrative that is simultaneously gripping and meditative, an engaging and thought-provoking portrait of a disappeared world.” – Natasha Tripney, Observer

“Compelling ... [Leo] is terrific at elucidating the slow, incremental steps by which people come to lie to themselves... guile, guilt and disappointment drip from these pages and Red Love is all the more affecting for it.” – Marina Benjamin, New Statesman

“Written without political rancour or historical revisionism… With truthful tenderness and wry humour, Maxim Leo looks back not in anger but in an effort to understand the past.” – Iain Finlayson, The Times

"In a wry, laconic style, [Leo] uses childhood memories to demonstrate how absurd 'grown-up' behaviour can be – and how easily absurdity can morph into tragedy." – Maggie Fergusson, The Economist, “Intelligent Life

“Honest and sober... a convincing depiction of what everyday life was like and the legacy it has left... illuminating.” – Metro

"Leo uses the intimate scope of his family to explore the turbulent political history of East Germany from a perspective that has not been seen before. The result is an absorbing and personal account that gives outsiders an insight into life in the GDR." – Shortlist