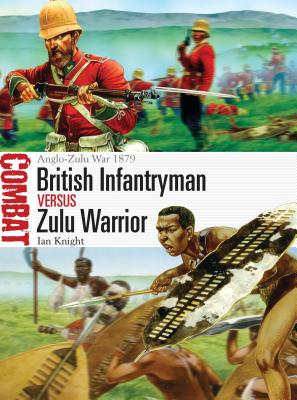 By Ian Knight, Peter Dennis (Illustrator)
$22.00
This book is out of stock indefinitely, unable to order at this time.

The short but savage Anglo-Zulu War of 1879 pitched well-equipped but complacent British soldiers and their auxiliaries into combat with one of history's finest fighting forces, the Zulu Nation. The clashes between these two very different combatants prompted rapid tactical innovation on both sides, as the British and their Zulu opponents sought to find the optimal combination of mobility and firepower.

Fought on 22 January 1879, the clash at Nyezane saw Zulu forces, among them the uMxapho ibutho, ambushing a British column; the British forces, including Lieutenant Martin's company of the 2/3rd Foot, engaged their opponents in the prescribed fashion, as honed in the recent conflict with the Xhosa a year earlier. The Zulu attack was premature, and by 9.30am, after about 90 minutes of heavy fighting, they were repulsed. The British tactics worked, but largely only because the Zulus had an uncharacteristically low numerical superiority.

At iSandlwana later that same day, however, the shortcomings of the British tactics, obscured at Nyezane, were made brutally apparent. The Zulus had sufficient manpower not only to withstand that level of casualties but also to complete their encirclement of the British forces, and as the British line disintegrated the firefight gave way to the close-quarter fighting at which the Zulus excelled; not one man of the 1/24th and 2/24th Foot survived. The British forces surrounded and crushed at iSandlwana included Captain W.E. Mostyn's company of the 1/24th Foot, which was initially deployed in advance of the British camp but was later withdrawn to form part of the firing line; their opponents included the iNgobamkhosi ibutho, many of whose warriors left first-hand accounts of the battle.

While iSandlwana demonstrated the strengths of the Zulu tactics, it also demonstrated their weaknesses - for the casualties inflicted by the British foreshadowed the carnage they would reap once the British wholeheartedly embraced close-order tactics and defended positions. At Khambula on 29 March 1879, a much bigger British force adopted a defensive position and defeated the same Zulu units who had previously triumphed at iSandlwana, including the uKhandempemvu ibutho, which came close to storming the British defences. At iSandlwana, the Zulus had been able to screen their advance with skirmishers and take advantage of the broken and grassy ground, but at Khambula their spontaneous attack did not allow them to disperse properly and they were funnelled together on a contracting front over woefully exposed ground. The British had learned the tactical lessons of iSandlwana and deliberately sought to restrict the Zulu ability to manoeuvre and co-ordinate their attacks, and to concentrate their own firepower.

Ian Knight is widely acknowledged as a leading authority on the colonial campaigns of the Victorian Empire. He has written extensively on the subject including several Men-at-Arms, Campaign, Essential Histories, Elite and Fortress titles for Osprey, including the Queen Victoria's Enemies series. He has worked on a number of television documentaries and is a founder member of the Victorian Military Society. He has received awards for his work on campaigns in southern Africa during the 19th century, notably the Anglo-Zulu War. He lives in West Sussex, UK.

Peter Dennis was inspired by contemporary magazines such as Look and Learn, leading him to study Illustration at Liverpool Art College. Peter has since contributed to hundreds of books, predominantly on historical subjects, including many Osprey titles. A keen wargamer and modelmaker, he is based in Nottinghamshire, UK.

“This is the third book in the new Combat series from Osprey which looks at soldiers who faced each other in battle. The book compares the fighting styles and tactics of the British and Zulus in three very different battles -- Nyezane (22 January 1879), iSandlwana (22 January 1879), and Khambula (29 March 1879). Accounts from combatants on both sides are included. Besides the period black and white photos and artwork, there are color maps, color photos of the battlefields as they appear today, and weapons carried by British troops and Zulus. Illustrator Peter Dennis has done some excellent panoramic paintings of the battles as well as full-page illustrations of both a British infantryman and a typical Zulu warrior.” —IPMS/USA