The Art of Cervantes in Don Quixote: Critical Essays (Studies in Hispanic and Lusophone Cultures #27) (Hardcover) 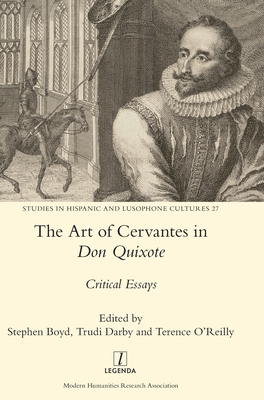 Four centuries after his death in 1616, Cervantes's great novel (the first novel), Don Quixote (1605; 1615), continues to fascinate readers and generate debate about key questions. Were the efforts of the deluded hidalgo and his corpulent squire to revive the lost age of chivalry intended simply to amuse? Or to be the vehicle for a sustained reflection on the acts of writing and reading, the state of Spanish society, the nature of reality itself? And if so, from what political and ideological perspectives? Should Don Quixote, a multi-generic text par excellence, be understood not simply as a novel, but as a poem and a performance? Cervantes is acknowledged as a supremely innovative stylist, but what was the nature and extent of his debt to classical and Renaissance rhetoric?

These major areas of critical enquiry are addressed by ten leading scholars based in British and Irish universities. Each essay focuses on a particular aspect of the novel, and examines in its light particular chapters, scenes, motifs or techniques, while at the same time offering a comprehensive reading of the text. Taken as a whole, the ideas and approaches presented in this volume contribute to an understanding of Cervantes's art in Don Quixote that balances detail with synthesis.