Welcome to the Desert of Post-Socialism: Radical Politics After Yugoslavia (Paperback) 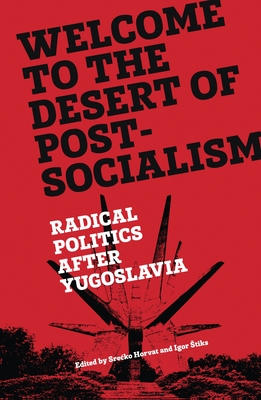 This volume offers a profound analysis of post-socialist economic and political transformation in the Balkans, involving deeply unequal societies and oligarchical “democracies.” The contributions deconstruct the persistent imaginary of the Balkans, pervasive among outsiders to the region, who see it as no more than a repository of ethnic conflict, corruption and violence. Providing a much needed critical examination of the Yugoslav socialist experience, the volume sheds light on the recent rebirth of radical politics in the Balkans, where new groups and movements struggle for a radically democratic vision of society.

Srećko Horvat is a philosopher and author of several books, including What Does Europe Want?, co-written with Slavoj Žižek. He has written for the Guardian, Al Jazeera and the New York Times. Igor Štiks has won numerous awards and been translated into a dozen European languages. His novel A Castle in Romagna was the first of his books to be published in English.

“Finally a book we have been waiting for. A cold analytic look free of all versions of Balkanism, free of nostalgia for Yugoslav self-management Socialism, but also free of all illusions about liberal-democratic Brave New World. A report from the people who are effectively engaged in emancipatory struggles in ex-Yugoslavia. A must for everyone who wants to understand the post-Communist transition from bad to worse.”
—Slavoj Žižek

“We have entered a new age of resistance, and this dramatic change is nowhere more striking than in the post-socialist Balkans. As this invaluable book argues compellingly, the ‘transition’ period ended with a bang: new forms, subjects and strategies of dissent and resistance have sprang from Zagreb to Ljubljana and from Sofia to Sarajevo. They respond to two common enemies, greedy neoliberal capitalism and the post-democratic governance of ‘experts’ and corrupt elites. This book gives a new positive meaning to balkanization: instead of division and fragmentation, it marks the coming together of people in all parts of the region in an attempt to trace the contours of a future of justice and democracy.”
—Costas Douzinas

“They say that when the Nazis had Tito surrounded, he saved himself by hiding in a big cave. This is how it is in the Balkans: the resistance is often forced to conceal itself in caves and forests. But it never goes away. This book hopes and prepares for the resistance to step back into the open.”
—Antonio Negri

“[Welcome to the Desert of Post-Socialism] is a very important initiative for the region and beyond … [It] is a work that has opened the debate and encourages, in the coming years, the publication of this kind of writings about the space of ex-Yugoslavia and in Eastern Europe in general, which have long been at the center of imperialist propaganda against any idea of transcending capitalism.”
—Philippe Alcoy, Left Voice