Explore Everything: Place-Hacking the City (Paperback) 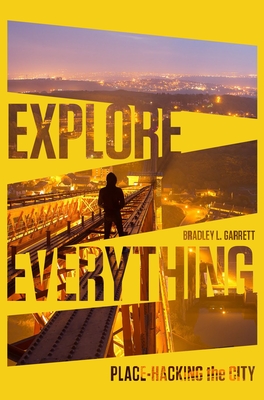 By Bradley Garrett
$19.95
This book is out of stock indefinitely, unable to order at this time.

It is assumed that every inch of the world has been explored and charted; that there is nowhere new to go. But perhaps it is the everyday places around us—the cities we live in—that need to be rediscovered. What does it feel like to find the city’s edge, to explore its forgotten tunnels and scale unfinished skyscrapers high above the metropolis? Explore Everything reclaims the city, recasting it as a place for endless adventure.

Plotting expeditions from London, Paris, Berlin, Detroit, Chicago, Las Vegas and Los Angeles, Bradley L. Garrett has evaded urban security in order to experience the city in ways beyond the boundaries of conventional life. He calls it ‘place hacking’: the recoding of closed, secret, hidden and forgotten urban space to make them realms of opportunity.

Explore Everything is an account of the author’s escapades with the London Consolidation Crew, an urban exploration collective.

The book is also a manifesto, combining philosophy, politics and adventure, on our rights to the city and how to understand the twenty-first century metropolis.

Bradley L Garrett is a writer, photographer and researcher in the School of Geography and the Environment at the University of Oxford. After studying anthropology at the University of California, Riverside and working in Australia, Mexico and Hawaii as an archaeologist, Brad became an urban explorer, photographing off-limits urban spaces in the UK, Europe and America. His exploits have been featured in GQ Magazine, the Guardian, the Red Bulletin, and on TV and radio around the world.

Details of his recent research and media projects and a list of current publications can be found at www.bradleygarrett.com.

A GUARDIAN BOOK OF THE YEAR

“Urban exploration is... a way of renegotiating reality, transforming the moment, turning the city into a video game. Except that, in this game, you only have one life.”—Evening Standard

"A unique and electrifying travelogue … Garrett and his fellow travelers are as fit, agile and fearless as ninja."—Booklist, Starred Review

“For Garrett, physical exploration is merely the outward manifestation of a deeper philosophical inquiry. The theoretical DNA of much of his work traces back to the concept of 'psychogeography.'"—GQ