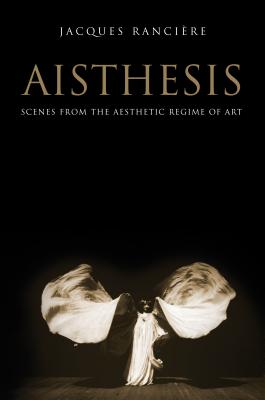 By Jacques Ranciere, Zakir Paul (Translated by)
Unavailable, our apologies.
Sorry, We Can Not Obtain this Book at This Time

Composed in a series of scenes, Aisthesis–Rancière’s definitive statement on the aesthetic–takes its reader from Dresden in 1764 to New York in 1941. Along the way, we view the Belvedere Torso with Winckelmann, accompany Hegel to the museum and Mallarmé to the Folies-Bergère, attend a lecture by Emerson, visit exhibitions in Paris and New York, factories in Berlin, and film sets in Moscow and Hollywood. Rancière uses these sites and events—some famous, others forgotten—to ask what becomes art and what comes of it. He shows how a regime of artistic perception and interpretation was constituted and transformed by erasing the specificities of the different arts, as well as the borders that separated them from ordinary experience. This incisive study provides a history of artistic modernity far removed from the conventional postures of modernism.

Zakir Paul is a doctoral candidate in comparative literature at Princeton University. He most recently translated a collection of Blanchot’s political writings.

“French philosopher Jacques Rancière is a refreshing read for anyone concerned with what art has to do with politics and society.”—Art Review

“In the face of impossible attempts to proceed with progressive ideas within the terms of postmodernist discourse, Rancière shows a way out of the malaise.”—Liam Gillick

“It’s clear that Jacques Rancière is relighting the flame that was extinguished for many—that is why he serves as such a signal reference today.”—Thomas Hirschhorn

“Far from the grand narratives of modernism that claim the language of art progresses in the search for purity ... modernity breaks down the hierarchy between spheres of culture, disturbing the boundaries between art and life ... [Rancière] analyzes a series of moments from this other history that could only be written in proliferating fragments ... this aesthetic ‘regime’ conditions the forms of art and democracy in an era of the permanent emergence of new sovereign subjects.”—Le Monde

“Since The Division of the Sensible ... Rancière has been reminding those who would separate the wheat from the chaff in contemporary creative practices that art only exists as an unstable boundary that must be continually crossed. In Aisthesis the philosopher develops his thinking, drawing fifteen scenes of a counter-history of artistic modernity.”—Le Magazine Littéraire