A Life of Extremes: The Life and Times of a Polar Filmmaker (Hardcover) 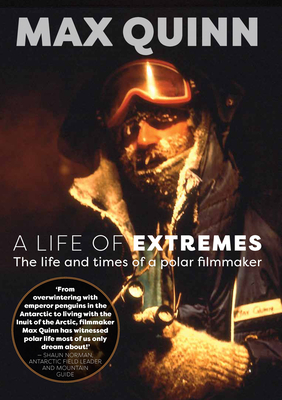 Filming in the world’s most extreme environments requires more than just a steady hand. In temperatures as low as -50 degrees, your body shuts down and your equipment freezes up. But it’s worth it to witness and record the stunning beauty and epic struggle of life on the edge.

Since 1991 when he spent 11 months filming the wildlife of Antarctica, Max Quinn has been the go-to filmmaker for documentaries such as Expedition Antarctica (2010), Hunting the Ice Whale (2013) and South America’s Weirdest (2019). A Life of Extremes tells the stories and shares the stunning images from Quinn’s 20 years of adventures in polar climates. Be it travelling 80 kilometres over crevassed ice to a lonely colony of Emperor penguins, or figuring out how to keep cameras warm in the coldest places on earth, Max Quinn has a story to tell about it. Natural history fans will be enthralled by the rich and layered stories, while film buffs will marvel at techniques required to keep the camera rolling when pushed to the absolute limit of endurance.

Become inspired to leave the tourist trail behind with this unique book about what life is like behind the camera, beyond public transport and even human habitation. Learn about dog sled racing, the last great ice age, penguin colonies, and everything else that happens in the immensely beautiful landscapes where the temperature is permanently below freezing.

Max Quin is one of the world’s most experienced polar filmmakers. Over a 50-year career in television, he has filmed in some of the most extreme environments on Earth, creating documentaries for the likes of National Geographic, Discovery Channel, and The Smithsonian Channel. In 1991, Max wintered over in Antarctica for 11 months to film and direct documentaries on the Emperor Penguin and winter life at New Zealand’s Scott Base. Max went on to film, direct and produce many natural history documentaries including more than 10 based around the Polar Regions as well as the Pacific, China, Australia and North and South America, such as Ice Pilots (2005), Expedition Antarctica (2010), Hunting the Ice Whale (2013) and South America’s Weirdest (2019). In recent years, Max has been working extensively in Mexico, the USA, Taiwan and China (including Tibet), for a series of nature documentaries for National Geographic Wild. Although officially "retired," Max still works as a freelance producer, director and cameraman, specialising in polar climates, natural history, wildlife and the global environment. He has just completed filming for a major three-part wildlife series in Brazil. Max lives with his wife in Dunedin, New Zealand, and shows no signs of slowing down.

A Life of Extremes is a personal memoir of Max’s travel and polar filmmaking encounters with wildlife in these remote locations. Whether it be travelling eighty kilometres over ice to a lonely colony of emperor penguins (Aptenodytes forsterior) or being surrounded by minke whales (Balaenoptera bonaerensis) frolicking in pools of open water, Max has a story to tell about it.—Australian Wildlife Magazine

This is quite an amazing book, showing the hardship, danger and excitement of filming in extreme weather conditions. As well as the scientific aspects of the films, the author has a real interest in and knowledge of the polar wildlife, and many different species feature throughout the book. It is well illustrated in colour photographs, with the pictures alone almost being able to tell the story. I can heartily recommend this book.—Alan Stewart, Wildlife Detective

Quinn is an effective storyteller and succeeds in highlighting a range of experiences that moves the book well past what could easily have been 'we came, we saw, we got cold.'—David Barnes, Otago Daily Times

A great book that inspires and shows the endurance and energy one person must have to do the thing they love most even when the risks are high… the rewards were priceless.—Diaries of a Cheshire Wildlife Watcher

An inherently fascinating and impressively informative read about an unusual life lived out under unusual circumstances, <i>A Life of Extremes: The Life and Times of a Polar Filmmaker</i> is especially and unreservedly recommended for community, college, and university library American Biography and American Cinematography collections.—Midwest Book Review

His up- close experience of the Arctic and Antarctica also meant Max was early to the climate change story, addressing it years before An Inconvenient Truth woke the world up, sort of.—1964 Magazine