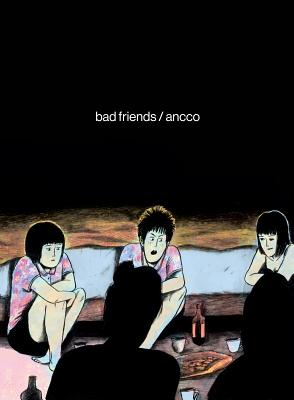 One of the best and most brutal graphic novels I have ever read, Bad Friends is the author recounting her teenage years in 1990s South Korea with her best friend Jeong-ae. They start fights, scheme to run away, and try to survive the violence that follows them in school and at home, all desperately trying to make some happy moments for one another. Ancco is unflinching in her tale and I was left with a heavy stone on my chest after finishing it. I cannot recommend it enough.

Included on Publishers Weekly’s Best of 2018 list! A story of the enduring quality of female friendship amid a gritty landscape of abuse.

“Against gorgeous, starkly sketched city scenes of South Korean alleyways and hostess bars, the rebellions and secret longings of ’90s teenager Pearl and her group of “bad friends” play out in this imported debut discovery.”—Publishers Weekly

Jinju is bad. She smokes, drinks, runs away from home, and has no qualms about making her parents worry. Her mother and sister beg her to be a better student, sister, daughter; her beleaguered father expresses his concerns with his fists. Bad Friends is set in the 1990s in a South Korea torn between tradition and Western modernity and haunted by an air of generalized gloom. Cycles of abuse abound as the characters enact violence within their power structures: parents beat children, teachers beat students, older students beat younger students. But at each moment that the duress verges on bleakness, Ancco pulls back with soft moments of friendship between Jinju and her best friend, Pearl. What unfolds is a story of female friendship, a Ferrante-esque connection formed through youthful excess, malaise, and struggle that stays with the young women into adulthood.

Served by a dry and precise line, Bad Friends viscerally captures the adolescent years of two young women who want and know they deserve something different but, ultimately, are unable to follow through. In a culture where young women are at a systemic disadvantage, Ancco creates a testimonial to female friendship as a powerful tool for survival. Jinju forgets her worst adolescent memories, but she cannot ever shake the memory of her friendship with Pearl during her most tumultuous years.

Ancco began publishing diary comics in 2002 to quick acclaim, capturing an audience with the immediacy and honesty of her cartooning. Rooted in her lived experience, Ancco’s works of fiction share these strengths, bringing an authentic and genuine voice to a generation of Korean youth. The original edition of her most recent graphic novel, Bad Friends, won the Korean Comics Today Prize, and the French translation (which was her second book to be translated into French) won the Prix Révélation at the Angoulême International Comics Festival in 2016, a prize awarded to stand-out work from young cartoonists. Ancco was born in 1983 just outside of Seoul, Korea, in Seongnam.

"Bad Friends is an electrifying ode to the grit of adolescence and the way it gets trapped beneath your adult skin, grinding away at you decades after you've made your escape. A master renderer of aches and darknesses and bright, hot yearnings, Ancco explores friendship and intimacy in a way that make both feel bracingly new, and piercingly familiar. You'll find a piece of yourself in this book."—Alexandra Kleeman, author of You Too Can Have A Body Like Mine

"Ancco’s Bad Friends is the unforgettable story of a lost, pivotal friendship. I read it in a single sitting, thrilled by its power, ingenuity, and grace. I love this book."—R.O. Kwon, author of The Incendiaries

"[Bad Friends] offers the tender revelation that telling someone else'??s story is a form of recuperation and undoing; one that is especially profound in a world that still refuses to see women... These stories liberate us to be what we are: friends, artists, monsters, mothers, human beings."—Thea Lim, The Globe & Mail

"One quality of strong storytelling, sometimes, is making the reader think “This could have been me”. That’s what Bad Friends is all about."—Toronto Star