Mary Wept Over the Feet of Jesus (Hardcover) 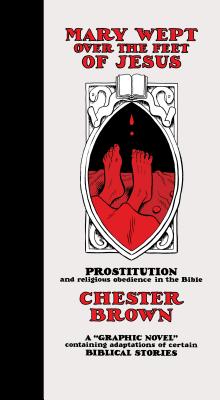 Holy shit this graphic novel is deep, mysterious, and profane! I know most of the Bible stories and it still manages to re-contextualize and seed terror.

“The Bible is Chester Brown’s holy harlot. He plumbs the mysteries of her depths while she schools him in the ways of love. Like all of Chester’s work, Mary Wept Over the Feet of Jesus is confounding, yet addictive, instantly re-readable, and expands with revelations in his hundred pages of notes. A work of passion, research, and elegant clarity. My new favourite.”—Craig Thompson, author of Blankets and Habibi

“Chester Brown is both God’s and the devil’s gift to the world.”—David Henry Sterry, author of Hos, Hookers, Call Girls and Rent Boys

“Chester’s work never fails to surprise and delight me. Since I always enjoy mythic and legendary tales of harlots, I knew I would like Mary Wept Over the Feet of Jesus, but I was pleased and impressed by the way he used all these stories to illustrate a larger theme about humanity’s relationship to Divinity and the role my profession plays in that relationship. Chester shows that spirituality and sexuality, which are so often depicted in our culture as opposed to one another, are actually deeply intertwined.”—Maggie McNeill, author of The Honest Courtesan

The iconoclastic and bestselling cartoonist of Paying for It: A comic-strip memoir about being a john and Louis Riel returns and with a polemical interpretation of the Bible that will be one of the most controversial and talked-about graphic novels of 2016. Mary Wept Over the Feet of Jesus is the retelling in comics form of nine biblical stories that present Chester Brown's fascinating and startling thesis about biblical representations of prostitution. Brown weaves a connecting line between Bathsheba, Ruth, Rahab, Tamar, Mary of Bethany, and the Virgin Mother. He reassesses the Christian moral code by examining the cultural implications of the Bible's representations of sex work.

Mary Wept Over the Feet of Jesus is a fitting follow-up to Brown's sui generis graphic memoir Paying for It, which was reviewed twice in The New York Times and hailed by sex workers for Brown's advocacy for the decriminalization and normalization of prostitution. Brown approaches the Bible as he did the life of Louis Riel, making these stories compellingly readable and utterly pertinent to a modern audience. In classic Chester Brown fashion, he provides extensive handwritten endnotes that delve into the biblical lore that informs Mary Wept Over the Feet of Jesus.

Chester Brown was born in Montreal in 1960 and is best known for his two recent nonfiction graphic novels: the meticulously researched and Harvey Award-winning Louis Riel and the controversial, critically acclaimedPaying for It. Brown began self-publishing his comic book series Yummy Fur at twenty-three, and has been publishing with D+Q since 1991. He is the author of The Playboy, I Never Liked You, The Little Man, and Ed The Happy Clown. Brown lives in Toronto, where he ran for Parliament twice as a member of the Libertarian Party of Canada.

"[Mary Wept] includes stories about Ruth, Bathsheba, Tamar, Job, and, of course, Mary of Bethany. Brown doesn’t tell these stories to demean the women involved: he advocates for the legalization of sex work and respect for its practitioners."—Salon

"His evenhanded pace of four small panels on each page keeps the tone understated, and he gets a lot of comedic mileage out of rendering biblical dialogue into modern vernacular...But Brown zeros in on the human drama in each story...and his visual craftsmanship is as sharp as it's ever been."— The New York Times

"Chester Brown’s Mary Wept Over the Feet of Jesus may be the most provocative comic book published this year... Though he tells familiar stories, Brown often pushes them in surprising—and sometimes even shocking—directions... Brown defends [his] conclusion[s] in a series of lengthy exegetical endnotes that capture both the scope of his inquiries and the shape of his own fascinations.”—Slate Book Review

"…this graphic interpretation of tales of sex and personal politics from the Bible is revelatory and brilliant. That Brown is an excellent artist is a given, but the research and documentation here is scholarly and insightful."—Miami Herald

"Mary Wept Over the Feet of Jesus is a spiritual successor, of sorts, to the acclaimed 2011 memoir/manifesto Paying For It... In a way, the 55-year-old Brown has been building toward this book, which combines a deep interest in Christian theology and sex-work advocacy, his entire career."—Globe & Mail

"Brown here is, as always, an original thinker, and his take on the Good Book is oddly uplifting."—Macleans