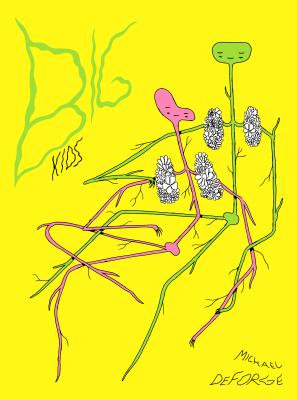 After his boyfriend breaks up with him, Big Kids' adolescent narrator turns into a tree, a normalized life event that separates him from half of those around him. He can suddenly see and feel more-- sensations that come alive through DeForge's surreal and skin-tickling illustrations. Relationships shift, degrade, and reform throughout. What memories, bonds and ways of seeing do we lose when our bodies change? To read Big Kids is to feel a surge of pins and needles settle into the shape of your hands.

Big Kids is simultaneously Michael DeForge's most straightforward narrative and his most complex work to date. It follows a troubled teenage boy through the transformative years of high school as he redefines his friends, his interests, and his life path. When the boy's uncle, a police officer, gets kicked out of the family's basement apartment and transferred to the countryside, April moves in. She's a college student, mysterious and cool, and she quickly takes a shine to the boy.

The boy's own interests quickly fade away: he stops engaging in casual sex, taking drugs, and testing the limits of socially acceptable (and legal) behavior. Instead, he hangs out with April and her friends, a bunch of highly evolved big kids who spend their days at the campus swimming pool. And slowly, the boy begins to change, too.

Eerie and perfectly paced, DeForge's Big Kids muses on the complicated, and often contradictory, feelings people struggle with during adolescence, the choices we make to fit in, and the ways we survive times of change. Like Ant Colony and First Year Healthy, Big Kids is a testimony to the harshness and beauty of being alive.

Michael DeForge was born in 1987 and grew up in Ottawa, Ontario. His one-person anthology series Lose has received great critical and commercial success, and has been nominated for or won every major comics award, including the Ignatz and Eisner awards. His illustrations have been published in The New York Times and Bloomberg View; and his comics have appeared in The Believer, Maisonneuve, and the Adventure Time comic book series.

"Big Kids is a bildungsroman of sorts; the story of a troubled teenage boy navigating the transformative years of high school, redefining his friends, interests, and life path. Anybody with a passing familiarity with DeForge’s unsettling, vividly beautiful comics will know that this is a deceptively simple summation."—Zainab Akhtar, The Guardian

"In the world of comics, there’s no shortage of narratives about adolescence. But you’ve probably never read one as memorably surreal as Michael DeForge’s Big Kids."—Abraham Riesman, Vulture

"... an outstanding work by one of the most original voices in comics today.—Pete Redrup, The Quietus

"Big Kids is a revelation and DeForge’s art is an unsettling, uncompromising and highly refreshing addition to the comics landscape."—Mark Sinclair, The Creative Review

"... a book that is bursting with complex ideas and fragile emotions"—Craig Hubert, Artinfo