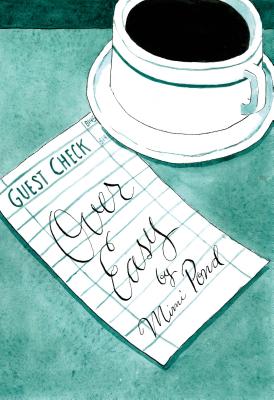 A fast-paced semi-memoir about diners, drugs, and California in the 1970s

Over Easy is a brilliant portrayal of a familiar coming-of-age story. After being denied financial aid to cover her last year of art school, Margaret finds salvation from the straightlaced world of college and the earnestness of both hippies and punks in the wisecracking, fast-talking, drug-taking group she encounters at the Imperial Café, where she makes the transformation from Margaret to Madge. At first she mimics these new and exotic grown-up friends, trying on the guise of adulthood with some awkward but funny stumbles. Gradually she realizes that the adults she looks up to are a mess of contradictions, misplaced artistic ambitions, sexual confusion, dependencies, and addictions.
Over Easy is equal parts time capsule of late 1970s life in California—with its deadheads, punks, disco rollers, casual sex, and drug use—and bildungsroman of a young woman who grows from a naïve, sexually inexperienced art-school dropout into a self-aware, self-confident artist. Mimi Pond's chatty, slyly observant anecdotes create a compelling portrait of a distinct moment in time. Over Easy is an immediate, limber, and precise semi-memoir narrated with an eye for the humor in every situation.

Mimi Pond is a cartoonist, illustrator, and writer. She has created comics for the Los Angeles Times, Seventeen magazine, National Lampoon, and many other publications, and has written and illustrated five humor books. She has also written for television: her credits include the first full-length episode of The Simpsons "Simpsons Roasting on an Open Fire" and episodes for the television shows Designing Women and Pee Wee's Playhouse. She lives in Los Angeles with her husband, the painter Wayne White.

“A sublimely evocative depiction of California in the 70s.” —Guardian Best Graphic Novels of 2014

“For lovers of tawdry tales from the '70s, told with smarts and sensitivity, Over Easy is a gold mine.” —Los Angeles Times

“This graphic memoir captures the funky ethos of the time, when hippies, punks and disco aficionados mingled in a Bay Area at the height of its eccentricity...Theres an intoxicating esprit de corps to a well-run everyday joint like the Imperial Cafe and never has the delight in being part of it been more winningly portrayed.” —Salon.com Ten Spectacular Graphic Novels from 2014

“Her lines are unpretentious and airy, and her people aren't overwhelmed by their affectations; Pond can capture facial expressions with a line or two.” —NPR