I Am Black Wall Street (Paperback) 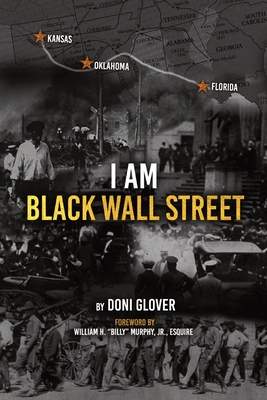 It's not easy being an entrepreneur. And if you're Black and in America, the stakes are usually higher. However, given the success of the ancestors during even harsher times, Glover leaves aspiring business owners with the motivation to conquer any challenge that comes their way. While there are several books already written about the bitter-sweet history of Tulsa's famed Black Wall Street, Doni Glover instead looks at the story behind the story. How did those Black people get to Oklahoma in the first place? Who and what led them there? As Glover peels back the layers, the reader finds that Black Wall Street's entrepreneurial spirit was birthed out of an amazing 500-year continuum of freedom colonies. Who knew? In I Am Black Wall Street, Glover counters mainstream thought with a book highlighting some little-known slave insurrections across the Western Hemisphere and their leaders from South America all the way to Spanish Florida. He goes deep into the history of freedom or maroon colonies, havens for escaped slaves in Venezuela, Mexico, throughout the Caribbean, and yes, in the US, too. That's where Black Seminole Chief John Horse emerges as a gallant warrior who led his people on the Trail of Tears to Oklahoma and then beyond. Also, abolitionist John Brown and Exoduster leader "Pap" Singleton play key roles in helping make Kansas a popular destination for tens of thousands of Blacks fleeing the horrors of the Deep South. Glover asserts that if Blacks could create freedom colonies and build Black Wall Street communities back then during the 1800s, surely a Black person could start a business and succeed in America today. While entrepreneurship is not for everyone, it is increasingly a viable option. And Black women-owned start-ups are leading the nation This book is a must-read because it will enlighten the reader to some important yet lesser-known history that is hidden right before our very eyes. I Am Black Wall Street will also inspire this new generation of entrepreneurs by assuring them that they stand on the very broad shoulders of certified giants who were masters of their own destiny. This book represents the spirit behind the ORIGINAL Black Wall Street SERIES featuring the Joe Manns Awards where BmoreNews.com and its Partners have honored over 1,700 Black entrepreneurs and professionals as well as the people who support them regardless of race.