180 Weeks in the War on Terror (Paperback) 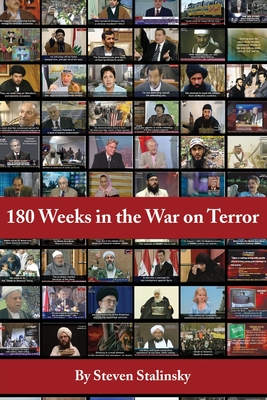 From 2003 to 2008, Steven Stalinsky penned a weekly column for The New York Sun covering the post-9/11 world. His column captured an important era from which emerged the War on Terror. 180 Weeks in the War on Terror is the complete collection of writings, including historic milestones and events during this period.

One of the first writers post-9/11 to show how Al-Qaeda and other terrorist organizations relied on the Internet, Stalinsky:

The column had an international impact. Stalinsky's writings were referenced by prominent figures and media, used in Congressional hearings and Capitol Hill briefings, and cited in official U.S., Canadian, U.K. and U.N. documents and reports. His articles on and translations of support for jihad, martyrdom operations, and terrorist organizations stirred direct public responses from those exposed, including Saudi royal family members, a leading London-based Arabic-language newspaper editor with close ties to Osama bin Laden, and the top cleric of Egypt's influential and revered Al-Azhar mosque.

On the 20th anniversary of 9/11, don't miss an important contribution to understanding this period of history.

"Timely release on the 20th anniversary of tragic 9/11, ironically as the U.S. exits from Afghanistan, the backdrop of Al Qaeda and events highlighted in this collection. This earlier retrospective details Middle East issues and terrorism dynamics, highlighting the innocence once ours. Evocative, haunting collection reminds us how vulnerable we were then and continue to be now. Essential primer for the serious reader to understand daily events and how we got here." - Gisele Eben

"Important for understanding the thinking and atmosphere after 9/11. 20 years later, it's fascinating to compare the writing to subsequent developments, including how prescient the columns often were." - S. Smith

"Takes us back to the days after 9/11 as policymakers grappled with how to approach a world that changed in a single moment. For anyone to understand the last 20 years and make future decisions on geopolitical issues." - R. Abraham