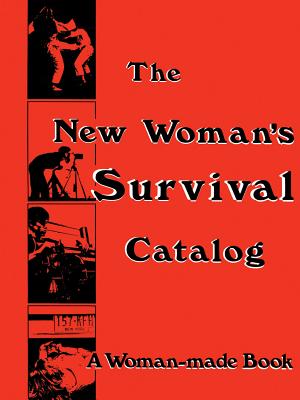 By Kirsten Grimstad (Editor), Susan Rennie (Editor)
$30.00
On Our Shelves Now - Available to Ship to Your Home

At once practical and creative, this book was feminism's Whole Earth Catalog

Originally published in 1973, The New Woman's Survival Catalog is a seminal survey of the second-wave feminist effort across the US. Edited by Kirsten Grimstad and Susan Rennie in just five months, The New Woman's Survival Catalog makes a nod to Stewart Brand's influential Whole Earth Catalog, mapping a vast network of feminist alternative cultural activity in the 1970s.

Grimstad and Rennie set out on a two-month road trip in the summer of 1973, meeting and interviewing a range of organizations and individuals, and gathering vital information on everything from arts groups to bookstores and independent presses, health, parenting and rape crisis centers and educational, legal and financial resources. These projects express a rejection of the values of existing institutional structures," Grimstad and Rennie wrote, "and, unlike the hip male counterculture, represent an active attempt to reshape culture through changing values and consciousness. Arranged in themed sections on art, communications, work and money, child care, self-help, self-defense and activism, The New Woman's Survival Catalog provides crucial insight into feminist initiatives and activism nationwide during the Women's Movement. It includes a "Making the Book" section that details the publication's production. Kirsten Grimstad and Susan Rennie are the coeditors of The New Woman's Survival Catalog and The New Woman's Survival Sourcebook (1975). They went on to cofound Chrysalis: A Magazine of Women's Culture, published out of the Woman's Building in downtown Los Angeles from 1977 to 1981. Grimstad is currently Co-Chair of Undergraduate Studies at Antioch University, Los Angeles; she is the author of The Modern Revival of Gnosticism and Thomas Mann's Doktor Faustus (2002). Rennie taught social sciences at Union Institute & University in Cincinnati, worked as a women's health activist and now lives in Venice, California.--Meg Miller "New York Times.