A Hundred Other Girls: A Novel (Paperback) 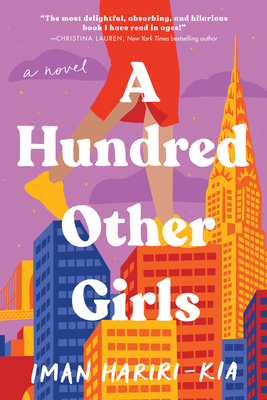 "The most delightful, absorbing, and hilarious book I have read in ages." —Christina Lauren, New York Times bestselling author of The Soulmate Equation

For fans of The Devil Wears Prada and The Bold Type comes a smart, modern story about the shifting media landscape and one Middle Eastern–American writer finding her place in it.

How far would you go to keep the job a hundred other girls are ready to take?

Noora's life is a little off track. She's an aspiring writer and amateur blogger in New York—which is a nice way of saying that she tutors rich Upper East Side kids and is currently crashing on her sister's couch. But that's okay. Noora has Leila, who has always been her rock, and now she has another major influence to lean on: Vinyl magazine. The pages of Vinyl practically raised Noora, teaching her everything from how to properly insert a tampon to which political ideology she subscribes to.

So when she lands a highly coveted job as assistant to Loretta James, Vinyl's iconic editor-in-chief, Noora can't believe her luck. Her only dream is to write for Vinyl, and now with her foot firmly in the door and the Loretta James as her mentor, Noora is finally on the right path… or so she thinks.

Loretta is an unhinged nightmare, insecure and desperate to remain relevant in an evolving media landscape she doesn't understand. Noora's phone buzzes constantly with Loretta's bizarre demands, particularly with tasks Loretta hopes will undermine the success of Vinyl's wunderkind digital director Jade Aki. The reality of Noora's job is nothing like she expected, and a misguided crush on the hot IT guy only threatens to complicate things even more. But as Loretta and the old-school print team enter into a turf war with Jade and the woke-for-the-wrong-reasons digital team, Noora soon finds herself caught in the middle. And with her dream job on the line, she'll need to either choose a side or form her own.

Clever, incisive, and thoroughly fun, A Hundred Other Girls is an insider's take on the changing media industry, an ode to sisterhood, and a profound exploration of what it means to chase your dreams.

Iman Hariri-Kia is a writer and editor born and based in New York City. A nationally acclaimed journalist, she covers sex, relationships, identity, and adolescence. You can often find her writing about her personal life on the internet, much to her parents’ dismay.

"The Devil Wears Prada looks tame compared to this take on the magazine world." — Cosmopolitan

"This workplace comedy proves that there's a little bit of truth to every joke." — Zibby Owens for Good Morning America

"Noora's personal journey will resonate with millennial and Gen Z readers, and it's also a good choice for fans of dishy workplace dramas like The Knockoff and The Devil Wears Prada." — Booklist

"Noora is a perfectly flawed, expertly crafted protagonist, and a highlight of her character arc are the explorations of her Iranian American identity and of the meaning of family. The distinct and vivid narration, especially the electrifying descriptions of NYC, makes this debut engaging...relevant, witty, and easy to devour." — Library Journal

"A refreshing take on the classic media-insider novel, championing the value of passion and thoughtfulness over career." — Kirkus Reviews

"A witty portrait of sisterhood, ambition, and the relationships we forge with those that we love." — Happy Mag

"Witty and winning, A Hundred Other Girls announces a new writer of immense gifts." — BookRiot

"The most delightful, absorbing, and hilarious book I have read in ages! An automatic favorite--there is nothing like this anywhere. Iman Hariri-Kia has that rare talent that comes along once in a decade." — Christina Lauren, New York Times bestselling author of The Soulmate Equation

"Juicy and fun. I loved it!" — Cat Marnell, New York Times bestselling author of How To Murder Your Life

"Slick, astute, and clever as hell, this book literally is the zeitgeist. Between the biting cultural commentary, heart-thumping plot, guffaw-worthy zingers, and ultra-vivid characters, reading A Hundred Other Girls felt like watching a Gen-Z The Devil Wears Prada on a big screen…. Take it from a former beauty editor: It’s more realistic than you might think." — Amanda Montell, author of Cultish: The Language of Fanaticism and Wordslut: A Feminist Guide to Taking Back the English Language

"A Hundred Other Girls will speak to a generation of women learning to separate who they are from what they do." — Lindsey Metselaar, We Met at Acme Podcast

"Witty, crispy fresh, and utterly modern, Iman Hariri-Kia writes with a remarkably sure and wise voice that keeps you quickly turning those pages, instantly making Noora a character so real, vulnerable, and relatable, you can't help but keep rooting for her." — Lola Akinmade Akerstrom, author of In Every Mirror She's Black

"A Hundred Other Girls had me hooked from the first page. Funny, charming, smart, and insightful, Iman has proven that she’s a talent to watch. Her depiction of women’s media shifting to digital was so real it hurt." — Gabrielle Korn, author of Everyone (Else) Is Perfect

"Iman Hariri-Kia beautifully captures what it's like to be young in New York City and wanting everything all at once." — Catherine Cohen, comedian, actress, and writer