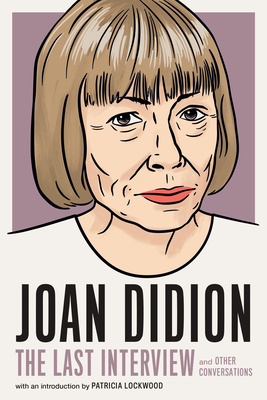 The iconic writer whose prose was as influential and as it is unmistakably hers is joined in conversation with Sheila Heti, Hilton Als, Dave Eggers, Hari Kunzru and many more.

Some writers define a generation. Some a genre. Joan Didion did both, and much more. Didion rose to prominence with her nonfiction collection, Slouching Towards Bethlehem, and she quickly became the writer who captured the zeitgeist of the washed-out, acid hangover of the 60s. But as a bicoastal writer of fiction and nonfiction whose writing ranged from personal essays and raw, intimate memoirs to reportage on international affairs and social justice, Didion is much harder to pin down than her reputation might suggest.

This collection encompasses it all, in conversations that delve into her underappreciated mid-career works, her influences, the loss of her husband and daughter, and her most infamous essays. Far from the evasive, terse minimalist that has come to dominate the image of Joan Didion, what this collection reveals is a warm, thoughtful woman whose well earned legacy promises to live on for readers and writers for many generations to come.

JOAN DIDION is widely considered to be one of the most influential writers of the 20th century. Born in Sacramento, California in 1934, she moved to New York City to begin her writing career after receiving a Bachelor of Arts in English from the University of California, Berkeley in 1956.  (CONTINUED UNDER ADDITIONAL SELLING POINTS)

"Candid interviews with a literary icon...A gift for Didion’s many fans." -- Kirkus Reviews

"Little about her writing goes undiscussed. The Last Interview highlights the complex person behind both the image and the pen." -- Alta Online

"This curated collection of interviews with Joan Didion is marked by her consistently brilliant way of thinking, but also by her shifts in tone over time...Patricia Lockwood's introduction — strong, smart and convincing — is reason enough to read the collection." -- The Star Tribune