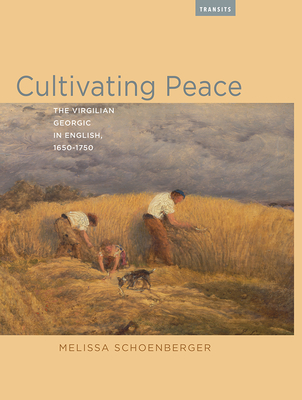 By Melissa Schoenberger
$34.95
Email or call for availability

During the decades following the English civil wars, British poets seeking to make sense of lingering political instabilities turned to Virgil’s Georgics. This ancient poem betrays deep ambivalences about war, political power, and empire, and such poets as Andrew Marvell, John Dryden, and Anne Finch found in these attitudes valuable ways of responding to the uncertainties of their own time. Composed during a period of brutal conflict in Rome, Virgil’s agricultural poem distrusts easy stability, urging its readers to understand that lasting peace must be sowed, tended, reaped, and replanted, year after year. Like the ancient poet, who famously depicted a farmer’s scythe suddenly recast as a sword, the poets discussed in Cultivating Peace imagine states of peace and war to be fundamentally and materially linked. In distinct ways, they dismantle the dream of the golden age renewed, proposing instead that peace must be sustained by constant labor.

Melissa Schoenberger is an assistant professor in the department of English at the College of the Holy Cross in Worcester, Massachusetts, where she specializes in Restoration and eighteenth-century poetry. Her articles have appeared in Restoration: Studies in English Literary Culture 1660–1700 and Translation and Literature.

"Cultivating Peace is an extremely smart examination of what might be called 'the georgic mode' in English verse of the seventeenth and eighteenth centuries, starting with Virgil … It is a significant piece of scholarship that should be of interest both to classicists and to scholars of English poetry in the long eighteenth century. The writing is clear and jargon free, the readings perceptive; we not only get a much richer, more complex, sense of how the georgic mode worked than we had before, but we also see it in historical context."
— Cedric D. Reverand II

"Melissa Schoenberger's important, compelling study provides an innovative re-evaluation of English georgic's development in the early modern period and its relationship to the laborious art of peace-making. Schoenberger identifies how poets from Marvell to Smart respond to the political aspects of Virgil's Georgics, particularly with regard to the farmer/statesman's ceaseless toil against disorder and chaos and his failure to secure a stable future. In doing so, this study convincingly presents peace-making as a fundamentally georgic act and advances our understanding not only of Virgil himself but also his wider cultural legacy."
— Ian Calvert

"A well written and cogently argued book that should be welcomed for its refreshingly new reading of the Virgilian georgic mode in English poetry of the long eighteenth century. Its strengths are many, not least, its juxtaposition of close reading with a keen sensitivity to social and political contexts."
— The Review of English Studies

"The narrative voice will often alight delicately on its objects only for them to morph into new ones almost as soon as they are observed. This, too, is a lovely imitative echo of Virgil’s light didactic touch....Rich and evocative."
— Marvell Studies

"Cultivating Peace is a fascinating book about Virgil's didactic agricultural poem The Georgics and the poetry and political thinking that it inspired in late seventeenth- and early eighteenth-century England. Melissa Schoenberger recovers, from Virgil's poem, a distinctively georgic understanding of peace as mutable and contingent."
— Eighteenth Century Studies