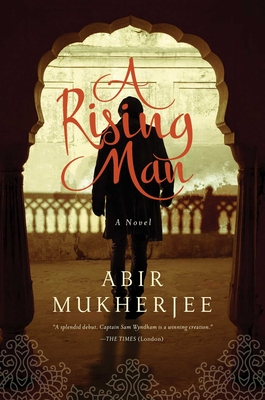 This is book number 1 in the Wyndham & Banerjee Mysteries series.

In the days of the Raj, a newly arrived Scotland Yard detective is confronted with the murder of a British official—in his mouth a note warning the British to leave India, or else . . .

Calcutta, 1919. Captain Sam Wyndham, former Scotland Yard detective, is a new arrival to Calcutta. Desperately seeking a fresh start after his experiences during the Great War, Wyndham has been recruited to head up a new post in the police force. He is immediately overwhelmed by the heady vibrancy of the tropical city, but with barely a moment to acclimatize or to deal with the ghosts that still haunt him, Wyndham is caught up in a murder investigation that threatens to destabilize a city already teetering on the brink of political insurgency.

The body of a senior official has been found in a filthy sewer, and a note left in his mouth warns the British to quit India, or else. Under tremendous pressure to solve the case before it erupts into increased violence on the streets, Wyndham and his two new colleagues—arrogant Inspector Digby and Sergeant Banerjee, one of the few Indians to be recruited into the new CID—embark on an investigation that will take them from the opulent mansions of wealthy British traders to the seedy opium dens of the city.

Masterfully evincing the sights, sounds, and smells of colonial Calcutta, A Rising Man is the start of an enticing new historical crime series.

A vibrant and powerful debut.

Winner of the Harvill Secker Daily Telegraph crime writing competition, this stirring, entertaining first mystery bursts with lively, colorful historical details about colonial Calcutta. The developing relationship between Wyndham and Banerjee is a delight. A fine start to a new crime series that will attract readers of M.J. Carter and Tarquin Hall.


British author Mukherjee’s outstanding debut and series launch combines a cleverly constructed whodunit with an unusual locale—Calcutta in 1919—portrayed with convincing detail. The nuanced relationship between Wyndham and his Indian assistant adds even more depth.

This checks pretty much every box in our ‘should we read this mystery?’ checklist. First, it launches a new series. Second, it's set in the past in another country, in this case Calcutta in 1919. Third, it was a hit overseas (in London). Fourth, the trades (Publishers Weekly, Library Journal, etc.) have praised it. Fifth, is enjoying enthusiastic support from early readers. Sixth (and this is a new one for us), it features a character known as ‘No Surrender’ Banerjee, which seals the deal.

The novel is filled with fascinating historical detail, intriguing crime, and a minefield of political pitfalls the characters must navigate. Both Sam Wyndham and Surrender-not Banerjee are two creatively developed characters who are more than capable of carrying readers through Calcutta for many books to come.

A crime novel that is, quite simply, enormous fun. Wyndham’s next assignment can’t come soon enough.

With a sly authorial wit, quirky characters, and historical details that anchor the story to its steamy, exotic locale, this debut novel is the first in what looks to be an entertaining new series similar to Barbara Cleverly’s Detective Joe Sandilands mysteries (especially The Damascened Blade, 2004).


[A] splendid debut...and his hero, Captain Sam Wyndham, is a winning creation.

A lip-smacking and highly entertaining mystery, set in a Calcutta so convincingly evoked that readers will find sweat bursting from their foreheads.