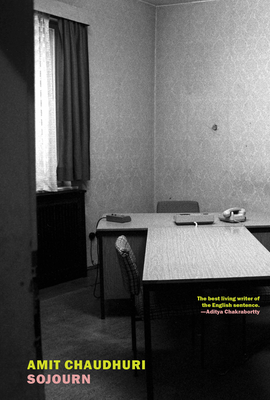 A slim novel about the everyday experiences of life in a new city. A man travels to Berlin in 2005 as a visiting professor and adjusting to the city means reconciling its history, both past and present. He's thoughtful trying to understand what is around him but can't seem to grasp any direct meaning. But truthfully it's all incidental.

In this haunting and noirish novel by a leading author and critic, an Indian writer travels to Berlin and soon finds himself slipping into a fragmented, fuguelike state.

An Indian writer has come to Berlin as a visiting professor. This is his second sojourn in the city, which seems strange, and also strangely familiar, to him. He is disoriented by its names, its immensity, and its history; he is worried that something may happen to him there.

Faqrul, a friendly Bangladeshi poet living in exile, takes him up—then disappears. The visiting writer is increasingly adrift in a city that not long ago was two cities, each cut off from the other, much as the new unified city is cut off from the divided one of the past. It is the fall of 2005; every day it grows colder. The visitor is beginning to feel his middle age.

To him, the new world of the twenty-first century, with its endless commodities from all over the place and no prospect of any sort of historical transformation, appears to exist in a state of amnesiac suspense. He gets involved with a woman, Birgit. He begins to miss his classes. He blacks out in the street. People are worried. “I’ve lost my bearings—not in the city; in its history,” he thinks. “The less sure I become of it, the more I know my way.” But does he?

Amit Chaudhuri’s Sojourn is a dramatic and disconcerting work of fiction, a book about the present as it slips into the past, a picture of a city and of a troubled mind, a historical novel about an ostensibly post-historical time, a story of haunting. Here, as in his earlier work, Chaudhuri pries open fictional form to explore questions of public and private life in ways that are both bold and subtle.

Amit Chaudhuri is a novelist, essayist, poet, and musician. A fellow of the Royal Society of Literature, he lives in Calcutta and the United Kingdom. Sojourn is his eighth novel. Among his other works are three books of essays, the most recent of which is The Origins of Dislike; a study of D.H. Lawrence’s poetry; a book of short stories, Real Time; two works of non-fiction, the latest of which is Finding the Raga; and four volumes of poetry, including New and Selected Poems (New York Review Poets, 2023). Formerly a professor of contemporary literature at the University of East Anglia, Chaudhuri is now a professor of cre- ative writing and the director of the Centre for the Creative and the Critical at Ashoka University, as well as the editor of www.literaryactivism.com. He has made several recordings of Indian classical and experimental music, and has been awarded the Commonwealth Writers’ Prize, the Los Angeles Times Book Prize for Fiction, and the Indian government’s Sahitya Akademi Award.

"Disorientation arrives in the very first line of Sojourn and percolates through this short, memorable book. . . It is 2005, and the unnamed narrator, an Indian writer like the author, is a visiting professor at a university in Berlin  . . As winter progresses, and the days grow emptier, the narrator begins to crumble inwardly.... Mr Chaudhuri’s writing, limpid and sparse, neatly illustrates this struggle to navigate the inner life: the fight to hold onto a fragile sense of self that can quickly disintegrate, as the surrounding world remains unperturbed, moving indifferently forward and away.” —The Economist

"Sojourn has [an] impressionistic tone – everything feels dreamlike, illusory and yet attentively described." —Edward Docx, The Guardian UK

"Mr. Chaudhuri’s fictional world too seems readily fathomable. It is outwardly calm, after all, and its inhabitants tend to drift back and forth on slow narrative tides. . . . There is little action and only muted suspense, yet in each case the habitually sedate pace becomes oddly hypnotic. It is the lyrical precision of Mr. Chaudhuri’s writing, however, that truly holds us fast. Scenes of everyday life, beautifully delineated, repeatedly conjure up a shimmering present in which we are held spellbound. . . . Mr. Chaudhuri’s slim new novel, Sojourn, maintains a similarly persistent grip." —Anna Mundow, Wall Street Journal

"A masterful writer in his own subtle, thoughtful, demanding genre." —Kirkus starred review

"The Indian writer and musician Amit Chaudhuri is one of modernism’s most eloquent contemporary champions. . . [In Sojourn] the elegant suggestiveness of the writing, its intelligence and perceptiveness, keeps one turning the pages." —Nikhil Krishnan, Daily Telegraph


"Sojourn is a stranger, altogether more destabilising novel than anything Chaudhuri has written before. . . . Chaudhuri is one of the most consistently interesting writers working today. You get the feeling that with each book he has to begin again, reconfigure from the ground up what he wants the novel to be and to do. It’s this radical questioning that makes him such a consistently engaging writer, and what makes this novel so memorable. I’ve read it twice and I still don’t know what Sojourn is really about. But I do know I’m still thinking about it." —Jon Day, Financial Times

"Chaudhuri is masterful at showing the effect Berlin has on the narrator. . . . we are absorbed by the 130 pages of text and its invitation to read between the lines." —Mika Ross-Southall, The Spectator (UK)


"I love Sojourn’s evocation of autumnal Berlin, through which a stranger drifts and undergoes a kind of disintegration. This is a mysterious, subtle, haunting novel." —Chris Power

"Sojourn is just stunning. I see in its DNA a little bit of Ishiguro’s mighty Unconsoled, but distilled. It’s really a piece of music . . . Reading it is like going into a trance." —Neel Mukherjee

"The perfect kind of strange little book to lead us into fall." —Emily Temple, Lit Hub

“Where most of us can barely trace our own footprints in the mass of moments that are the stuff of experience, numerous and storyless as grains of sand on a beach, Chaudhuri delves in masterfully to lift out arcs, moods, treasures.” —James Meek

“The best living writer of the English sentence.” —Aditya Chakrabortty

“Amit Chaudhuri has, like Proust, perfected the art of the moment . . . [he] is a miniaturist, for whom tiny moments become radiant, and for whom the complexities of the fleeting mood uncurl onto the page like a leaf, a petal.” —Hilary Mantel

“I find most moving in Chaudhuri’s writing those moments when his brilliance at literary transfiguration enacts not literary mastery but instead seems to issue from uncertainty, exile, elegy, absence, the premonition of loss.” —James Wood