A Summer Day in the Company of Ghosts: Selected Poems (Paperback) 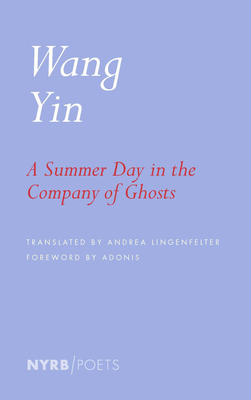 By Wang Yin, Andrea Lingenfelter (Translated by), Adonis (Foreword by)
$16.00

One of the best collections of poetry I've read in a long time. There’s something truly classic in Wang’s writing, not in the sense that his work feels old, but in that it feels like it has always existed. His poems cut to the bone with a precision that is awe inducing, whether he is describing lost love or watching China evolve in front of his eyes. To read him is to consume a true master of the craft, thankfully in English after all of this time.

A new, bilingual collection of poetry by a pioneering, multi-talented Chinese writer and photographer in a landmark English translation.

“My poems are flecks of salt clinging ambivalently to a horse’s back,” Wang Yin writes. This is the first comprehensive collection of this important Chinese poet’s work to appear in English, translated by Andrea Lingenfelter. Readers can follow the full arc of his career, from the early, surrealist, and Deep Image–influenced work of the 1980s, when he made his debut as a post-Misty poet, through the turn toward the rawer, more immediate poetry of the nineties, and on to the existential and ineffable weavings of his more recent work. Wang’s sensibility is both cosmopolitan and lyrical, and his poetry has a subtlety and beauty that contrasts with the often physically painful imagery with which he depicts psychological reality, a reality expressed as various states of mind struggling against the suppression of memory. Shanghai winters, a winter in Katowice, a summer day with ghosts, blue shadows, petals in the darkness, an “empty lane lit up by moonlight”—the poems of this extraordinary volume illuminate the inner life as a singular encounter between physical and spiritual realms.

Wang Yin is a poet, art journalist, and photographer. His poetry has appeared in several publications, including Granta, Continent, and Tendency. His 2015 poetry collection, Limelight, was awarded the Jiangnan Poetry Award and the Dong Dang Zi Poetry Award. Born in Shanghai, Wang now lives and works in Paris.

Andrea Lingenfelter is a poet, scholar of Chinese literature, and translator of contemporary Chinese-language fiction. Her translation of poetry by Zhai Yongming, The Changing Room, won a 2012 Northern California Book Award, and she was a 2008 recipient of the PEN Translation Fund grant and a 2014 National Endowment for the Arts Translation Grant awardee. She has also translated Hon Lai-chu’s The Kite Family, Li Pik-wah’s Farewell My Concubine, and Mian Mian’s Candy. She teaches at the University of San Francisco.

Adonis was born Ali Ahmad Said Esber in the Syrian village Al-Qassabin in 1930. In 1956, fleeing political persecution, he moved to Beirut. In 1985, the ongoing Lebanese Civil War forced him to relocate to Paris, where he has resided ever since. One of the most influential contemporary Arab poets, he is the author of numerous collections, a translator of Ovid and Saint-John Perse, and has received many honors, including the Ordre des Arts et des Lettres, the Goethe Prize, and the Pen/Nabokov Award.

“The poignant clarity of Wang Yin’s images, so memorably rendered by Andrea Lingenfelter, makes his poems burn in your brain long after you close the book." —Forrest Gander


"Wang Yin’s poetry is ever-changing and unpredictable, at once fierce and subtle, and infused with the spirit of the international poetry world in which he participates. He is one of the most outstanding avant-garde poets to emerge in China since 1980." —Bei Dao


"Wang Yin’s poetry is restrained and elegant, detached and yet brimming with feeling. His poetic language combines the classical Chinese merging of poetry and image with the distinctive dramatic qualities of modern Chinese. Reading his poetry immerses one in the delicate and transcendent lyrical atmosphere that he has created." — Zhai Yongming