When We Cease to Understand the World (Paperback) 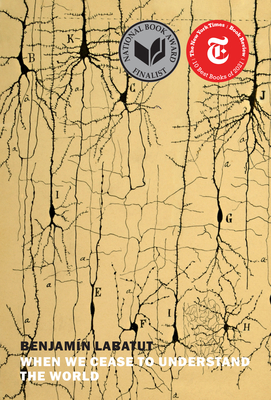 A rare book that compelled me to pick it up a second time just days after the first. Easily one of the most original novels in recent memory, this book's power in unsettling you is in your knowledge it's a work of fiction. Except most of it is mini bios of eccentric, maladjusted scientists and mathematicians of the past hundred or so years. Each's work led them to theories about the universe that are far more monstrous than the most terrifying science fiction or horror novel. They all went mad and spent the rest of their lives trying to escape their own work. Slowly, a tiny trickle of fiction makes its way into the narrative, destabilizing what you understand is real and not real. Just like those theories do. It's not quite a book about ceasing to understand the world as much as it is about how the closer we come to understanding what reality is in its totality, we will inevitably use it to cause our own annihilation. That cosmic paradox certainly seems to be our reality.Sleep tight.

A fictional examination of the lives of real-life scientists and thinkers whose discoveries resulted in moral consequences beyond their imagining.

When We Cease to Understand the World is a book about the complicated links between scientific and mathematical discovery, madness, and destruction.

Fritz Haber, Alexander Grothendieck, Werner Heisenberg, Erwin Schrödinger—these are some of luminaries into whose troubled lives Benjamín Labatut thrusts the reader, showing us how they grappled with the most profound questions of existence. They have strokes of unparalleled genius, alienate friends and lovers, descend into isolation and insanity. Some of their discoveries reshape human life for the better; others pave the way to chaos and unimaginable suffering. The lines are never clear.

At a breakneck pace and with a wealth of disturbing detail, Labatut uses the imaginative resources of fiction to tell the stories of the scientists and mathematicians who expanded our notions of the possible.

Benjamín Labatut was born in Rotterdam in 1980 and grew up in The Hague, Buenos Aires, and Lima. He published two award-winning works of fiction prior to When We Cease to Understand the World, which is his first book to be translated into English. Labatut lives with his family in Santiago, Chile.

Adrian Nathan West is a writer and literary translator living in Spain. His criticism has appeared in the London Review of Books, the Times Literary Supplement, and many other publications. He has translated books from German, Catalan, and Spanish, including Jean Améry's Charles Bovary, Country Doctor, which is published by NYRB Classics, and Pere Gimferrer for NYRB Poets. His debut novel, My Father’s Diet, was published in early 2022.

Selected by President Barack Obama for his Summer 2021 Reading List

“A gripping meditation on knowledge and hubris. . . . [Labatut] casts the flickering light of gothic fiction on 20th-century science. In five free-floating vignettes, he illuminates the kinship of knowledge and destruction, brilliance and madness. . . . His prose is masterfully paced and vividly rendered in Adrian Nathan West’s magnetic translation.” —Corinna da Fonseca-Wollheim, The New York Times Book Review

“When We Cease to Understand the World fuses fact and fiction to turn the modern history of physics into a gripping narrative of obsessed scientists, world-changing discoveries, and the ultimate results—often quite dark—of our drive to understand the fundamental workings of the universe.” —John Williams, The New York Times Book Review Podcast

“[When We Cease to Understand the World] is as compact and potent as a capsule of cyanide, a poison whose origin story takes up much of the opening chapter—the first of many looping forays into the wonders and horrors unleashed by science in the past few centuries. . . . It is a meditation in prose that bears a familial relationship to the work of W. G. Sebald or Olga Tokarczuk: a sequence of accounts that skew biographical but also venture into the terrain of imagination. . . . The stories in this book nest inside one another, their points of contact with reality almost impossible to fully determine.” —Ruth Franklin, The New Yorker

“Darkly dazzling. . . [Labatut] illustrates the unbreakable bond between horror and beauty, life-saving and life-destroying. . . . This book—as haunting as it is erudite—stubbornly insists on connecting the wonders of scientific advancement to the atrocities of history.” —Sam Sacks, The Wall Street Journal

“Labatut’s stylish English-language debut offers an embellished, heretical, and thoroughly engrossing account of the personalities and creative madness that gave rise to some of the 20th century’s greatest scientific discoveries. . . [Labatut’s] subject is the all-consuming human drive to discover, and the danger therein. . . Hard to pin down and all the more enjoyable for it, this unique work is one to be savored.” —Publishers Weekly, starred review

“[When We Cease to Understand the World] rattles the prevailing narrative of heroic scientific innovators.” —Mark Athitakis, Los Angeles Times

“Absolutely brilliant. I was utterly gripped and wolfed it down. It feels as if he has invented an entirely new genre.” —Mark Haddon

“A thrilling account of theories of physics, and as a series of highly-wrought imaginative extrapolations about the physicists who arrived at them.” —Geoff Dyer

“When We Cease to Understand the World by Benjamín Labatut is the strangest and most original book I’ve read for years. It hovers in a state between fiction and non-fiction, or wave and particle, and makes an account of modern mathematics and science into something as eerie as a great ghost story.” —Philip Pullman, New Statesman, ‘Books of the Year’

“Remind[s] us of fiction’s power to take us to another world and expand our understanding of this one . . . When We Cease to Understand the World showcases the minds seeking to pierce the mysterious heart of mathematics.” —The Guardian, ‘Biggest books of autumn’

“It may be possible to actually feel your brain getting bigger as you read.” —Evening Standard

“Labatut has written a dystopian nonfiction novel set not in the future but in the present.” —John Banville, The Guardian