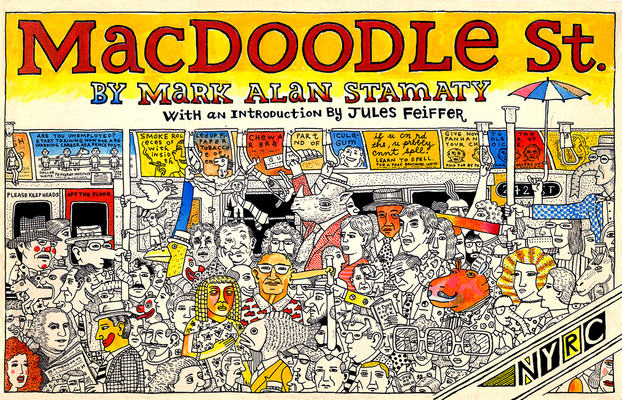 A collection of legendary absurdist comic strips about life in 1970s New York City, now available in print for the first time in over thirty years.

Every week, from 1978 to 1980, The Village Voice brought a new installment of Mark Alan Stamaty's uproarious, endlessly inventive strip MacDoodle St. Centering more or less on Malcolm Frazzle, a blocked poet struggling to complete his latest lyric for Dishwasher Monthly, Stamaty's creation encompassed a dizzying array of characters, stories, jokes, and digressions. One week might feature the ongoing battle between irate businessmen and bearded beatniks for control of a Greenwich Village coffee shop, the next might reveal a dastardly plot involving a genetically engineered dishwashing monkey, or the frustrated dreams of an irascible, over-caffeinated painter, or the mysterious visions of a duffle-coated soothsayer on the bus. Not to mention the variable moods and longings of the comic strip itself....

And somehow, in the end, it all fits together. MacDoodle St. is more than just a hilarious weekly strip; it is a great comic novel, a thrilling, surprising, unexpectedly moving ode to art, life, and New York City. This new edition features a brand-new, twenty-page autobiographical comic by Stamaty explaining what happened next and why MacDoodle St. never returned, in a unique, funny, and poignant look at the struggles and joys of being an artist.

Mark Alan Stamaty is an acclaimed cartoonist and illustrator. His children’s books include Who Needs Donuts? (1973, 2003), Alia’s Mission (2005), Shake, Rattle & Turn That Noise Down! (2010), Small in the Saddle (1975), Minnie Maloney & Macaroni (1976), and Where’s My Hippopotamus? (1977). In 1977–1978, Mark’s panoramic centerfold cartoons for the Village Voice of Greenwich Village and Times Square attracted widespread attention and were sold by the Voice as posters; he then created a series of comic strips for that paper, including MacDoodle St. In 1981, he created the acclaimed political comic strip Washingtoon for the Voice and The Washington Post, and it was soon picked up by more than forty papers. From 1994 to 1996, he was the political cartoonist for Time magazine, and from 2001 to 2003, he produced the monthly comic strip Boox for The New York Times Book Review. His cartoons, illustrations, covers, and comics reporting have appeared in The New Yorker, Harper’s, The New Republic, New York, GQ, and many other magazines and newspapers. His honors include two Gold Medals and two Silver Medals from the Society of Illustrators, the Premio Satira Politica Forte dei Marmi 2005 from the Museum of Satire and Caricature in Forte dei Marmi, Italy, a Page One Award from the Newspaper Guild of New York, and the Augustus Saint-Gaudens alumni career award from the Cooper Union. He was born in Brooklyn in 1947, and lives in New York.
Jules Feiffer has received a number of awards for his cartoons, plays, and screenplays, including the Pulitzer Prize for editorial cartooning. He is considered the most widely read satirist in the United States, and his work appeared regularly in several publications, including the Los Angeles Times, The Observer (London), The New Yorker, Playboy, Esquire, The Nation, and The New York Times. He was inducted into the Comic Book Hall of Fame in 2004. He lives in New York City.

"The hilarious narrative incorporates a talking baseball card, a cow spirit guide, and a cell of angry Wayne Newton fans. Stamaty’s strips are filled with surreal transformations, inventive page design, prolific decoration, and marginal commentary, frequently digressing and addressing its own plot, creation, and readers’ expectations. In a new 'Addendum' in comic form, Stamaty explains the circumstances around the strip’s end and his subsequent artistic rejuvenation. Readers looking for an extremely funny metacomic will enjoy this work immensely, as will those wanting a taste of 1970s New York City. The addendum is a fascinating, personal portrait of the life of a creative artist." —Library Journal


"Stamaty treats the strip like a canvas, filling it with layers of meticulous detail; tight, clean lines; playful self-awareness; and monkeys washing dishes….Though Stamaty's words are sly and kinetic, one can't help wanting more of his stupendous illustrations, somewhere between R. Crumb and Hergé. Mostly superb with bouts of just excellent." —Kirkus

"I have never read a comic strip that was this much alive. Stamaty comes at the reader in so many directions at once. It’s as if a classic adventure strip was fending off a Dada invasion while the battlefield (comics’ formal conventions) does somersaults as an ever-changing cast of broadcasters comment on the action.... It’s a funny and thrilling spectacle that has more than a whiff of danger." —James Sturm