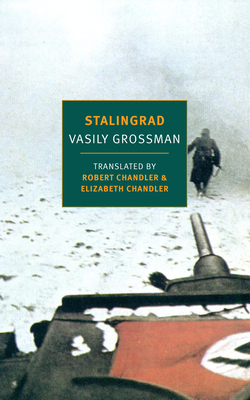 Now in English for the first time, the prequel to Vasily Grossman's Life and Fate, the War and Peace of the twentieth Century.

In April 1942, Hitler and Mussolini meet in Salzburg where they agree on a renewed assault on the Soviet Union. Launched in the summer, the campaign soon picks up speed, as the routed Red Army is driven back to the industrial center of Stalingrad on the banks of the Volga. In the rubble of the bombed-out city, Soviet forces dig in for a last stand.

The story told in Vasily Grossman’s Stalingrad unfolds across the length and breadth of Russia and Europe, and its characters include mothers and daughters, husbands and brothers, generals, nurses, political activists, steelworkers, and peasants, along with Hitler and other historical figures. At the heart of the novel is the Shaposhnikov family. Even as the Germans advance, the matriarch, Alexandra Vladimirovna, refuses to leave Stalingrad. Far from the front, her eldest daughter, Ludmila, is unhappily married to the Jewish physicist Viktor Shtrum. Viktor’s research may be of crucial military importance, but he is distracted by thoughts of his mother in the Ukraine, lost behind German lines.

In Stalingrad, published here for the first time in English translation, and in its celebrated sequel, Life and Fate, Grossman writes with extraordinary power and deep compassion about the disasters of war and the ruthlessness of totalitarianism, without, however, losing sight of the little things that are the daily currency of human existence or of humanity’s inextinguishable, saving attachment to nature and life. Grossman’s two-volume masterpiece can now be seen as one of the supreme accomplishments of twentieth-century literature, tender and fearless, intimate and epic.

Vasily Grossman (1905-1964) worked as a reporter for the army newspaper Red Star during World War II. His vivid yet sober The Hell of Treblinka was translated and used as testimony in the Nuremberg trials. His novels Life and Fate and Everything Flows; a collection of stories, journalism, and essays, The Road; and a work of travel writing, An Armenian Sketchbook, are all published by NYRB Classics.


Robert Chandler has translated many NYRB Classics, including Vasily Grossman's Life and Fate, as well as Soul and The Foundation Pit by Andrey Platanov. He lives in London.

Elizabeth Chandler is a co-translator, with Robert Chandler, of several titles by Andrey Platonov and Vasily Grossman.

Nominated for the 2020 Read Russia Prize

"Stalingrad is an epic novel, Tolstoyan in its proportions and ambition. . . . [A]n ideal historical novel for a new generation of readers.” —Time's "Must-Read Books of 2019"

"At last, the Russian novelist-journalist's mighty prequel to 'Life and Fate', his epic of the battle of Stalingrad and its aftermath, has received a definitive—and hugely powerful—English translation. A seething fresco of combat, domestic routine under siege and intellectual debate, it confirms that Grossman was the supreme bard of the second world war.” —The Economist, “Our books of the year”

"One needs time and patience to read Stalingrad, but it is worth it. Moving majestically from Berlin to Moscow to the boundless Kazakh steppe . . . A multitude of lives and fates are played out against a vast panoramic history." —Ian Thomson, Evening Standard's "Book of the Week"

“In its English version, Vasily Grossman’s Stalingrad is a beautifully readable novel of considerable length, gripping from beginning to end as it moves seamlessly from the dramas of historical events to the small, intimate predicaments of family and everyday life while war is raging. Robert Chandler and Elizabeth Chandler’s historical understanding and archival research made it possible to produce a book that salvages the novel from the fate of its mangled original, censored in the process of writing, editing, and production. Thanks to this English translation, Stalingrad is repaired and made available to readers of the original in Russian and to readers of other languages as well. This translation is both a literary achievement and a contribution to scholarship.” —Modern Language Association citation for the 2019 Lois Roth Award

"If you have read Grossman before, you will already very likely know that you urgently want to read Stalingrad. If you haven’t, I can only tell you that when you do read this novel, you will not only discover that you love his characters and want to stay with them—that you need them in your life as much as you need your own family and loved ones—but that at the end . . . you want to read it again." —Julian Evans, The Daily Telegraph

"This is a big event . . . [Stalingrad] gives voice to a dizzying array of experiences . . . You do feel as though you are there, wandering through those devastated streets among the starving, dead, and mad." —Claire Allfree, Daily Mail

"A dazzling prequel . . . His descriptions of battle in an industrial age are some of the most vivid ever written . . . Stalingrad is Life and Fate’s equal. It is, arguably, the richer book — shot through with human stories and a sense of life’s beauty and fragility." —Luke Harding, The Observer

"[F]ew works of literature since Homer can match the piercing, unshakably humane gaze that Grossman turns on the haggard face of war." —The Economist

"An extraordinary novel by war correspondent Grossman, completing, with Life and Fate, a two-volume Soviet-era rejoinder to War and Peace . . . A classic of wartime literature finally available in a comprehensive English translation that will introduce new readers to a remarkable writer." —Kirkus, starred review

"Grossman’s epic, sprawling novel from 1952 is a masterpiece of intertwined plots that cascade together in a long sequence of militaristic horror. . . . When the bombing of Stalingrad begins, Grossman cuts between viewpoints, rewinding time over and over again. A spectacular afterword details the extent of censorship the text suffered under Stalin. As a stand-alone novel, this is both gripping and enlightening, a tour de force. When considered as a whole with Life and Fate, this diptych is one of the landmark accomplishments of 20th-century literature.” —Publishers Weekly, starred review