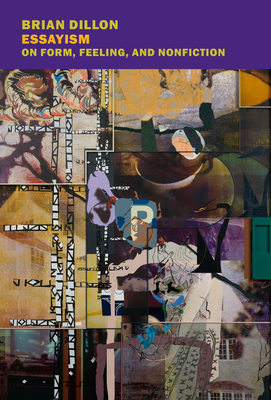 A book-length essay about essays, part critical appreciation for writers like Susan Sontag and Elizabeth Hardwick and Walter Benjamin, and partly an ode to the essence of a weird and tricky genre. This is a book about the way people like me - and probably you - live our lives through books, the way we turn to words for consolation, a manifesto for bibliophiles, the melancholy, and all writers-at-heart.

A compelling ode to the essay form and the great essaysists themselves, from Montaigne to Woolf to Sontag.

Essayism is a book about essays and essayists, a study of melancholy and depression, a love letter to belle-lettrists, and an account of the indispensable lifelines of reading and writing. Brian Dillon’s style incorporates diverse features of the essay. By turns agglomerative, associative, digressive, curious, passionate, and dispassionate, his is a branching book of possibilities, seeking consolation and direction from Michel de Montaigne, Virginia Woolf, Roland Barthes, Theodor Adorno, Walter Benjamin, Georges Perec, Elizabeth Hardwick, and Susan Sontag, to name just a few of his influences. Whether he is writing on origins, aphorisms, coherence, vulnerability, anxiety, or a number of other subjects, his command of language, his erudition, and his own personal history serve not so much to illuminate or magnify the subject as to discover it anew through a kaleidoscopic alignment of attention, thought, and feeling, a dazzling and momentary suspension of disparate elements, again and again.

Brian Dillon was born in Dublin in 1969. His books include The Great Explosion (short-listed for the Ondaatje Prize), Objects in This Mirror: Essays, I Am Sitting in a Room, Sanctuary, Tormented Hope: Nine Hypochondriac Lives, and In the Dark Room. His writing has appeared in The Guardian, The New York Times, the London Review of Books, The Times Literary Supplement, Bookforum, Frieze, Artforum, 4Columns, and The Yale Review. He is the UK editor of Cabinet magazine and teaches creative writing at Queen Mary University of London.

"A wonderful, subtle and deceptively fragmentary little book ... enjoyably roundabout and light-fingered ... To borrow from one of Barthes’s titles, this is a lover’s discourse, the love object being writing, not only in the essay but in all its forms. It is also a testament to the consolatory, even the healing, powers of art. And at the last, in its consciously diffident fashion – Dillon is a literary flaneur in the tradition of Baudelaire and Walter Benjamin – it is its own kind of self-made masterpiece." —John Banville, The Irish Times
"Written in lucid, exacting and unsentimental prose, Essayism is a vital book for people who turn to art—and especially writing—for consolation." —Lauren Elkin, The Guardian

"It is somewhat unseemly for a critic to confess that their immediate reaction to a book is one of unremitting envy. But Brian Dillon’s study of the essay is so careful and precise in its reading of a constellation of authors – Derrida and Barthes, Didion and Sontag, Browne and Burton, Woolf and Carlos Williams, Cioran and Perec – that my overall feeling was jealousy. ... A remarkable meditation on memory ... above all he claims to admire style, and he is exceptionally good at defining the styles he likes. ... His account of depression is reflected in thinking about the essay. Is it something composed of fragments and shards? Is it a coolly organised progression? Is it about confession? Is it about concealment? The book’s excellence lies in the way these paradoxes are held suspended. ... The book, ultimately, is about how literature can make a difference. It is a beautiful and elegiac volume. I can give no greater compliment than to say that having read it, I re-read it." —Stuart Kelly, New Statesman

"Brian Dillon could easily have written another book about the essay—its hallmarks, history, current role in literary turf wars, etc. What a relief, then, to find his Essayism navigating away, in its opening pages, from such a project, and turning instead toward this surprising, probing, edifying, itinerant, and eventually quite moving book, which serves as both anautobiographia literaria and a vital exemplar of how deeply literature and language can matter in a life." —Maggie Nelson, author of The Argonauts

"Erudite and elegiac ... Essayism is a constellation of close readings, its arguments coming to the fore through the repetition and rhyme between its sections. Dillon can locate the single comma or dash whose placement somehow sums up a writer’s aesthetic commitments (he does especially graceful work with Hardwick’s sentences)." —Will Rees, Times Literary Supplement

"[A] beautiful and original book about “essayism” … Partly memoir, partly disquisition on mortal peril and how to read your way through (some of) it, this is a brilliantly adventurous, clever and moving book." —Joanna Kavenna, Literary Review

"Dillon’s brilliantly roaming, roving set of essays on essays is a recursive treasure, winkling out charm, sadness, and strangeness; stimulating, rapturous, and provocative in its own right." —Olivia Laing, author of The Lonely City

"Brian Dillon has written a moving and vulnerable love letter to the essay as a genre—a region wherein fragmentation provides secret consolation. Depression and essayism, he brilliantly demonstrates, are twins. His own language has never been so sharp, suggestive, coiled—deliciously given over to idiosyncrasy. Interpretive treats abound: Dillon’s appreciations of Hardwick, Barthes, Sebald, and other fellow travelers are beautiful acts of critical generosity and acumen. All these wonders occur within a shattering account of literature’s power not to alleviate gloom but to justify (by illuminating) the fits and starts of consciousness." —Wayne Koestenbaum, author of Humiliation

"One of our most innovative and elegant nonfictioneers." —Robert Macfarlane, author of The Old Ways

"This book may hover (inter alia) around Montaigne’s famous tumble from his horse; only, in Dillon’s hands, it’s the essay itself that’s tumbling, crashing through the strata of its history, all its previous landscapes (those of Woolf, Hardwick, Blanchot, Cioran...) fragmenting and spinning in delirious recombinations." —Tom McCarthy, author of Satin Island

"Brian Dillon’s gymnastic brain here embodies the long shadows and descriptive delicacies of many essayist masters: it is a searing and addictive voice, ambitious to probe all corners of this condition called writing." —Helen Marten, winner of 2016 Turner Prize

"Essayism is a quiet and forceful triumph, an attractive, smart defence of stylistic subjectivity and aestheticism, and its direct bearing on life, themes too often ignored or slighted in the wake of anaesthetizing theoretical framework." —Nicolas Liney, Oxonian Review

“[Essayism is] profoundly thoughtful about the relationship between text and mood. . . Dillon slowly unspools paragraphs, sentences, and phrases until he is left with the thread of emotion, a personal story of depression that interweaves it all. The relationship between writing and depression is a long-standing and famous one, but Dillon adds new shades and colors, transforming a familiar palette into one both strange and thought-provoking.” —Rhian Sasseen, The Paris Review Daily