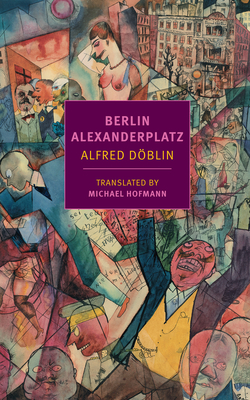 How to describe this roaring howl of a novel? It's often called the German Ulysses - a fair comparison, but instead of rambling ruminatively through Dublin, we're careening in a screaming streetcar through 1928 Berlin. Pop music, hawkers' calls, swishy ads, and the thoughts of passers-by all stream through the windows. Our guide is Franz Biberkopf - Frankie BBK - an oafish pimp who leads us down the local levels of hell. Döblin's tough-to-translate and extremely erudite verbal torrent (reborn in Hofmann's translation) is sometimes impenetrable but never boring. He makes us laugh and then sucker punches us. We're left dizzy and breathless and wondering why novels aren't written this way anymore.

The inspiration for Rainer Werner Fassbinder's epic film and that The Guardian named one of the "Top 100 Books of All Time," Berlin Alexanderplatz is considered one of the most important works of the Weimar Republic and twentieth century literature.

Berlin Alexanderplatz, the great novel of Berlin and the doomed Weimar Republic, is one of the great books of the twentieth century, gruesome, farcical, and appalling, word drunk, pitchdark. In Michael Hofmann's extraordinary new translation, Alfred Döblin's masterpiece lives in English for the first time.

As Döblin writes in the opening pages:

The subject of this book is the life of the former cement worker and haulier Franz Biberkopf in Berlin. As our
story begins, he has just been released from prison, where he did time for some stupid stuff; now he is back
in Berlin, determined to go straight.

To begin with, he succeeds. But then, though doing all right for himself financially, he gets involved in a
set-to with an unpredictable external agency that looks an awful lot like fate.

Three times the force attacks him and disrupts his scheme. The first time it comes at him with dishonesty and deception. Our man is able to get to his feet, he is still good to stand.

Then it strikes him a low blow. He has trouble getting up from that, he is almost counted out. And finally it hits him with monstrous and extreme violence.

Alfred Döblin (1878–1957) was born in German Stettin (now the Polish city of Szczecin) to Jewish parents. When he was ten his father, a master tailor, eloped with a seamstress, abandoning the family. Subsequently his mother relocated the rest of the family to Berlin. Döblin studied medicine at Friedrich Wilhelm University, specializing in neurology and psychiatry. While working at a psychiatric clinic in Berlin, he became romantically entangled with two women: Friede Kunke, with whom he had a son, Bodo, in 1911, and Erna Reiss, to whom he had become engaged before learning of Kunke’s pregnancy. He married Erna the next year, and they remained together for the rest of his life. His novel The Three Leaps of Wang Lun was published in 1915 while Döblin was serving as a military doctor; it went on to win the Fontane Prize. In 1920 he published Wallenstein, a novel set during the Thirty Years’ War, which was an oblique comment on the First World War. He became president of the Association of German Writers in 1924, and published his best-known novel, Berlin Alexanderplatz, in 1929, achieving modest mainstream fame while solidifying his position at the center of an intellectual group that included Bertolt Brecht, Robert Musil, and Joseph Roth, among others. He fled Germany with his family soon after Hitler’s rise, moving first to Zurich, then to Paris, and, after the Nazi invasion of France, to Los Angeles, where he converted to Catholicism and briefly worked as a screenwriter for Metro-Goldwyn-Mayer. After the war he returned to Germany and worked as an editor with the aim of rehabilitating literature that had been banned under Hitler, but he found himself at odds with conservative postwar cultural trends. He suffered from Parkinson’s disease in later years and died in Emmendingen in 1957. Erna committed suicide two months after his death and was interred along with him.

Michael Hofmann is a German-born, British-educated poet and translator. Among his translations are works by Franz Kafka; Peter Stamm; his father, Gert Hofmann; Herta Müller; and fourteen books by Joseph Roth. A recipient of both the PEN Translation Prize and the Helen and Kurt Wolff Translator’s Prize, Hofmann’s Selected Poems were published in 2009 and Where Have You Been?: Selected Essays in 2014. In addition to Berlin Alexanderplatz, New York Review Books publishes his selection from the work of Malcolm Lowry, The Voyage That Never Ends, and his translations of Jakob Wassermann’s My Marriage and Gert Ledig’s Stalin Front. He teaches in the English department at the University of Florida.

“A raging cataract of a novel, one that threatens to engulf the reader in a tumult of sensation. It has long been considered the behemoth of German literary modernism, the counterpart to Ulysses." —Alex Ross, The New Yorker

"Because of its use of collage, stream of consciousness, and colloquial speech, Berlin Alexanderplatz has frequently been compared to Joyce’s Ulysses and John Dos Passos’s Manhattan Transfer...Beneath the book’s innovative style, the reader can hear the gears of ancient narrative elements grinding: evocations of folk songs, myths and Old Testament stories, and themes of tragedy and fate.” —Amanda DeMarco, The Wall Street Journal

"It was long branded untranslatable…Yet a fluent, pacy new translation by Michael Hofmann gainsays that assumption, opening up the book for English-speakers….Something of the psychology of Weimar, the desire to touch the electric fence just to see what happens, lives on in modern societies and makes them, in their own ways, vulnerable to extremism and demagoguery...One lesson of Berlin Alexanderplatz is that darkness can take many forms." —The Economist

“[A] major writer who grappled with the roots of darkness in our time....” —Ernst Pawel, The New York Times

"In this new translation, the dissonant voices ring out boldly; we can tell when someone is being mimicked and wickedly sent up, enjoy the black Berlin humor...Döblin is never sentimental, or hysterical. He just gets us to listen to the drumbeat of violence throbbing in this city of the mind. Berlin Alexanderplatz is one of the great anti-war novels of our time." —Joachim Redner, Australian Book Review

“His was an extraordinary mind.” —Philip Ardagh, The Guardian

“Without the futurist elements of Döblin’s work from Wang Lun to Berlin Alexanderplatz, my prose is inconceivable.... He’ll discomfort you, give you bad dreams. If you’re satisfied with yourself, beware of Döblin.” —Günter Grass

“I learned more about the essence of the epic from Döblin than from anyone else. His epic writing and even his theory about the epic strongly influenced my own dramatic art.” —Bertolt Brecht

“As we look back over the rich literary output of this great writer, as we look back over the long and fruitful life of this fighter and this friend of man, this perennial spring of spiritual life, we venture to ask: When will the gentlemen [sic] of the Nobel Prize jury discover him?” —Ludwig Marcuse, Books Abroad