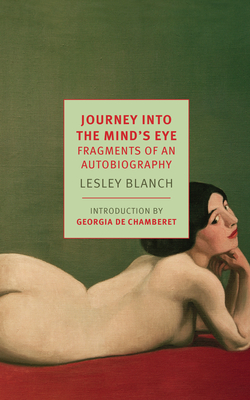 By Lesley Blanch, Georgia de Chamberet (Introduction by)
$18.95
On Our Shelves

A stunning tale set in England, Paris, and Moscow, chronicling Blanch's love for an older Russian man and the passionate obsession that takes her to Siberia and beyond.

“My book is not altogether autobiography, nor altogether travel or history either. You will just have to invent a new category,” Lesley Blanch wrote about Journey into the Mind’s Eye, a book that remains as singularly adventurous and intoxicating now as when it first came out in 1968.

Russia seized Lesley Blanch when she was still a child. A mysterious traveler—swathed in Siberian furs, bearing Fabergé eggs and icons as gifts along with Russian fairy tales and fairy tales of Russia—came to visit her parents and left her starry-eyed. Years later the same man returned to sweep her off her feet. Her love affair with the Traveller, as she calls him, transformed her life and fueled an abiding fascination with Russia and Russian culture, one that would lead her to dingy apartments reeking of cabbage soup and piroshki on the outskirts of Paris in the 1960s, and to Siberia and beyond.

Lesley Blanch (1904–2007) was born in west London. From 1922 to 1924 she studied painting at the Slade School of Art and worked steadily as an illustrator and commercial artist for the next decade, designing book jackets as well as costumes and sets for the theater and the ballet. After writing for several British magazines, Blanch turned to journalism full-time, and in 1937 she was named the features editor of British Vogue. She left the magazine in 1945, the same year she married the French novelist and diplomat Romain Gary. The couple moved to Bulgaria; Blanch would never reside in the United Kingdom again. Over the next two decades, they were posted to the Balkans, Switzerland, and the United States. In 1963, Gary divorced her to marry the actress Jean Seberg. Blanch traveled to Russia, Turkey, Central Asia, Iran, and North Africa, researching what would become twelve books. They include the biographies The Wilder Shores of Love (1954), The Sabres of Paradise (1960), and Pierre Loti: Portrait of an Escapist (1983); and one novel, The Nine-Tiger Ma (1965). Her memoirs On the Wilder Shores of Love: A Bohemian Life (2015) were published posthumously, along with a companion volume, Far to Go and Many to Love: People and Place (2017). She died in the south of France at the age of 103.

Georgia de Chamberet is an editor, translator, and journalist. She is one of the founding members of English PEN’s Writers in Translation Committee, a founder of the publishing consultancy BookBlast Ltd., and the editor of the online journal The BookBlast Diary. She is the literary executor of the estate of Lesley Blanch.

“Blanch’s brilliance lies in her honesty about the subjectivity of her work. For her, travel is neither an act of discovery nor an explication….but the endless attempt to bridge that vast land of otherness with the worlds we’ve created in our own minds….If Blanch’s Journey isn’t a traditional travelogue, it’s not because she can’t write about the Russia in front of her. It’s because that Russia…can never be the only one she sees.” —Tara Isabella Burton, The Paris Review

“She was incapable of writing boringly or badly…[Journey is an] incomparably eccentric exercise in autobiography.” —Philip Ziegler, The Spectator

“Everything about [Blanch] was abundant…She reminded you irresistibly of a gilded cupid, knowing neither vice nor virtue, but playful and loving, pouring out affection, humour, ideas, plans, stories, words from her rich cornucopia of personality.” —Anne Scott-James

“This book is a jewel: the prose is immaculate, the delineation of the human heart is unclouded by sentiment, and, in terms of contemporary feminism, it is almost on par with Freud’s Dora. An excellent study of the etiology of hysteria, Journey Iinto Tthe Mind’s Eye is one of the charter myths of contemporary women’s studies.” —Kevin McGrath, Harvard Review

“It is hard to classify her as a writer, unless as a scholarly romantic in a school of her own. Such is the depth of her research that other writers plunder her books shamelessly.” —Maureen Cleave, The Daily Telegraph

"One of the finest books about Russia ... one of the best travel books of its generation." —Spectator