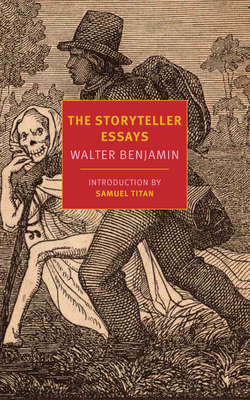 A new translation of philosopher Walter Benjamin's work as it pertains to his famous essay, "The Storyteller," this collection includes short stories, book reviews, parables, and as a selection of writings by other authors who had an influence on Benjamin's work.

“The Storyteller” is one of Walter Benjamin’s most important essays, a beautiful and suggestive meditation on the relation between narrative form, social life, and individual existence—and the product of at least a decade’s work. What might be called the story of The Storyteller Essays starts in 1926, with a piece Benjamin wrote about the German romantic Johann Peter Hebel. It continues in a series of short essays, book reviews, short stories, parables, and even radio shows for children. This collection brings them all together to give readers a new appreciation of how Benjamin’s thinking changed and ripened over time, while including several key readings of his own—texts by his contemporaries Ernst Bloch and Georg Lukács; by Paul Valéry; and by Herodotus and Montaigne. Finally, to bring things around, there are three short stories by “the incomparable Hebel” with whom the whole intellectual adventure began.

Walter Benjamin (1892-1940) was a philosopher, cultural critic, and essayist. Associated with the Frankfurt School, Benjamin influenced many of his contemporaries, including Bertolt Brecht, Gershom Scholem, and Theodor Adorno. Benjamin's best-known essays include "The Task of the Translator," "The Work of Art in the Age of Mechanical Reproduction," and "Theses on the Philosophy of History." In 1940, he committed suicide in Portbou, on the French-Spanish border, when his attempt to escape Nazi forces was thwarted.

Samuel Titan is an editor and translator based in Brazil. He teaches comparative literature at the University of São Paulo.

Tess Lewis has translated works from the French and German, including books by Peter Handke, Anselm Kiefer, Philippe Jaccottet, and Christine Angot. Her awards include the 2017 PEN Translation Prize and a Guggenheim fellowship. She serves as the co-chair of the PEN Translation Committee and is an advisory editor for The Hudson Review.

"[T]he newly published collection The Storyteller Essays, translated by Tess Lewis and edited by Samuel Titan, marks a unique achievement. . . . It provides a brief intellectual history of an essay and revivifies it" —Clint Williamson, Full Stop

“[B]ecause it is delivered without panic, quietly, in graceful sentences, from within the culture of books and criticism, it is hard at first to accept the implications of what Benjamin is saying. You suspect he is being bombastic in order for him to come back later and tell you what modern literature’s saving grace is, but the moment of redemption does not arrive. . . . Reading such claims over eighty years later, we might be reminded that every generation foresees a crisis and the end of the world as we know it. It is also possible that Benjamin had his eyes wide open at the beginning of our era and proved able to observe its salient features.”—Philip Ó Ceallaigh, The Stinging Fly