The Gulf War: A Captivating Guide to the United States-Led Persian Gulf War against Iraq for Their Invasion and Annexation of Kuwait (Hardcover) 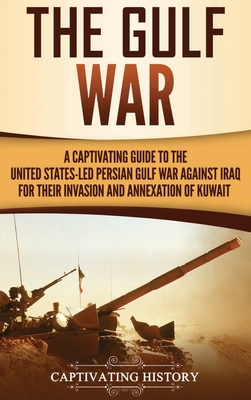 If you want to discover the captivating history of the Gulf War, then keep reading...

The late 1980s and early 1990s were times of significant changes. The Cold War was nearing its end as communism was slowly unraveling, new cyber and communication technologies were becoming more widespread, media was becoming more important and diverse, the economy was steadily growing in most parts of the world, and right-wing political parties and movements were gaining popularity across the globe. Amid all of those changes, a short but impactful war between the United States, aided by several allies, and Iraq occurred.

Today it is known by many names, like the First Iraq War, Kuwait War, and, most commonly, the Gulf War or the First Gulf War. It was a rather short conflict, lasting just shy of seven months between late 1990 and early 1991. Yet it was still rather impactful as it showcased several essential innovations and changes in political and technological aspects of warfare, some of which are still part of modern conflicts.

The Gulf War became a famous landmark in contemporary history. It signaled the break with the old ways of the 20th century and illuminated the path to our world today. For that reason, the Gulf War is still remembered and seen as an essential event in our recent past.

In The Gulf War: A Captivating Guide to the United States-Led Persian Gulf War against Iraq for Their Invasion and Annexation of Kuwait , you will discover topics such as

So if you want to learn more about the Gulf War, scroll up and click the "add to cart" button