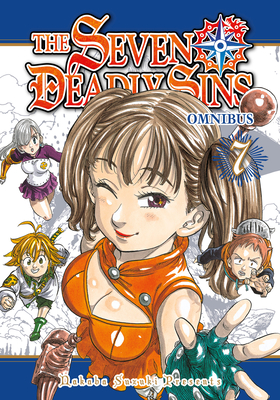 This is book number 7 in the The Seven Deadly Sins Omnibus series.

Ride forth into the magical world of Britannia with a new 3-in-1 omnibus version of the manga that inspired the most popular Netflix Original Anime worldwide! This book includes Vols. 19-21 of The Seven Deadly Sins manga, in a special, large size.

The deadly battle between The Seven Deadly Sins and The Ten Commandments rages on! Ban, Jericho, and Elaine manage to escape from Galand and Melascula by taking refuge in a bar buried within the depths of a cave. The proprietor of the oddlyl ocated establishment is more than he appears to be at first glance. Meanwhile, the announcement of a Fighting Festival, promising to grant the winner any wish they desire, draws Meliodas and the rest of The Sins to Vaizel, along with Diane, whose memories still remain shrouded in fog. With Sin pitted against Sin, will they fall into The Ten Commandments’ trap, or will their friendship be strong enough to save them?

Contains Vol. 19-21 of the adventure manga that inspired the hit Netflix Original anime!