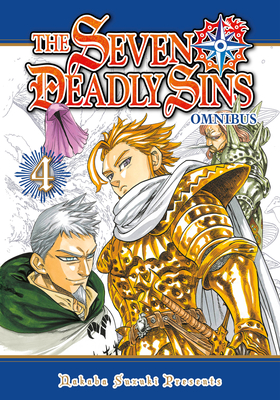 This is book number 4 in the The Seven Deadly Sins Omnibus series.

Ride forth into the magical world of Britannia with a new 3-in-1 omnibus version of the manga that inspired the most popular Netflix Original Anime worldwide! This book includes Vols. 10-12 of The Seven Deadly Sins manga, in a special, large size.

While storming the Kingdom, King discovers Diane on the brink of death! Secrets long forgotten rise to the surface asKing must come to grips with his painful past. Afterward, Meliodas and The Seven Deadly Sins find themselves teaming up with King Arthur against the unfathomably powerful Hendrickson in a fight to save Princess Elizabeth! Just when things are at their bleakest, an unexpected hero will step forward to save the world from darkness!

Contains Vol. 10-12 of the adventure manga that inspired the hit Netflix Original anime!