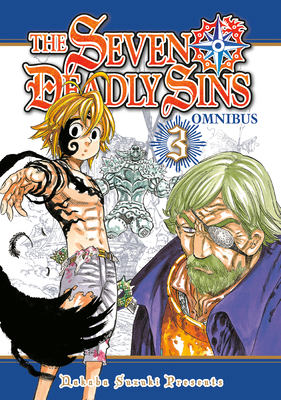 This is book number 3 in the The Seven Deadly Sins Omnibus series.

Ride forth into the magical world of Britannia with a new 3-in-1 omnibus version of the manga that inspired the most popular Netflix Original Anime worldwide! This book includes Vols. 7-9 of The Seven Deadly Sins manga, in a special, large size.

Meliodas escapes the Goddess Amber, but he emerges from his prison strangely silent and with a new look. In the blink of an eye, he wrecks Guila and Jericho and begins delivering an epic beating to Sir Helbram, who somehow manages to stand up to the transformed Dragon Sin of Wrath. Just what is going on with this new Meliodas, and how is it that Helbram can withstand Meliodas’s new, mighty form? If that wasn’t enough, The Sins also reunite with another former ally—Gowther, the Goat’s Sin of Lust! But they have no time for pleasantries, as the arrival of a new monster sends the Sins rushing back to Liones to save the Kingdom. Will the Sins be able to protect the Kingdom of Liones and save Britannia before the destruction of their world begins, or will this be the beginning of a new Holy War?

Contains Vol. 7-9 of the adventure manga that inspired the hit Netflix Original anime!