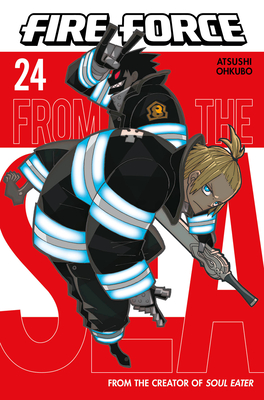 This is book number 24 in the Fire Force series.

Now a hit anime! The new action fantasy set in a steampunk Tokyo from the creator of the smash hit Soul Eater!

Arthur has a new sword. Shinra explores how to travel to Adolla…while his brother Shо̄ reaches out to him from the other side. Meanwhile, the Evangelist puts into motion the end of the world. A great pillar rises from the sea, and with it a gargantuan threat. The Great Cataclysm has begun!

Atsushi Ohkubo made his manga debut in 2001. In 2004, he created Soul Eater, which would run for seven years and become an international bestseller, later adapted into a hit anime broadcast on Cartoon Network. Fire Force is his first manga for Kodansha Comics.