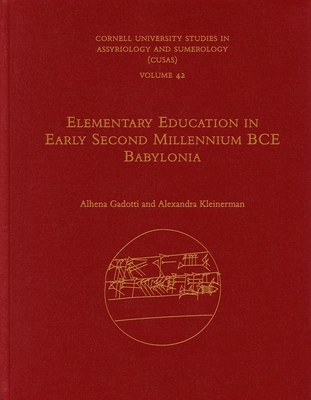 In this volume, Alhena Gadotti and Alexandra Kleinerman investigate how Akkadian speakers learned Sumerian during the Old Babylonian period in areas outside major cities.

Despite the fact that it was a dead language at the time, Sumerian was considered a crucial part of scribal training due to its cultural importance. This book provides transliterations and translations of 715 cuneiform scribal school exercise texts from the Jonathan and Jeanette Rosen Ancient Near Eastern Studies Collection at Cornell University. These tablets, consisting mainly of lexical texts, illustrate the process of elementary foreign-language training at scribal schools during the Old Babylonian period. Although the tablets are all without provenance, discrepancies between these texts and those from other sites, such as Nippur and Ur, strongly suggest that the texts published here do not come from a previously studied location. Comparing these tablets with previously published documents, Gadotti and Kleinerman argue that elementary education in Mesopotamia was relatively standardized and that knowledge of cuneiform writing was more widespread than previously assumed.

By refining our understanding of education in southern Mesopotamia, this volume elucidates more fully the pedagogical underpinnings of the world's first curriculum devised to teach a dead language. As a text edition, it will make these important documents accessible to Assyriologists and Sumerologists for future study.