Dr. No: A Novel (Paperback) 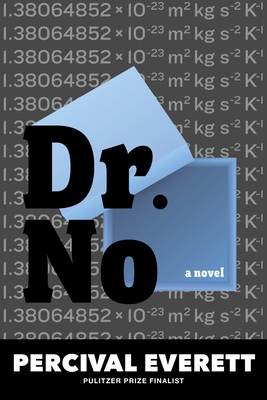 A sly, madcap novel about supervillains and nothing, really, from an American novelist whose star keeps rising

The protagonist of Percival Everett’s puckish new novel is a brilliant professor of mathematics who goes by Wala Kitu. (Wala, he explains, means “nothing” in Tagalog, and Kitu is Swahili for “nothing.”) He is an expert on nothing. That is to say, he is an expert, and his area of study is nothing, and he does nothing about it. This makes him the perfect partner for the aspiring villain John Sill, who wants to break into Fort Knox to steal, well, not gold bars but a shoebox containing nothing. Once he controls nothing he’ll proceed with a dastardly plan to turn a Massachusetts town into nothing. Or so he thinks.

With the help of the brainy and brainwashed astrophysicist-turned-henchwoman Eigen Vector, our professor tries to foil the villain while remaining in his employ. In the process, Wala Kitu learns that Sill’s desire to become a literal Bond villain originated in some real all-American villainy related to the murder of Martin Luther King Jr. As Sill says, “Professor, think of it this way. This country has never given anything to us and it never will. We have given everything to it. I think it’s time we gave nothing back.”

Dr. No is a caper with teeth, a wildly mischievous novel from one of our most inventive, provocative, and productive writers. That it is about nothing isn’t to say that it’s not about anything. In fact, it’s about villains. Bond villains. And that’s not nothing.

Percival Everett is the author of more than twenty books. He is the recipient of the Hurston/Wright Legacy Award and the PEN Center USA Award for Fiction. He teaches at the University of Southern California and lives outside Los Angeles.

“[Dr. No is] sharp-witted satire about racism, violence and academia – and it proves why Everett is one of the most unpredictable and original novelists working today.”—Michael Schaub, NPR.org, Best Books of 2022

“Everett is a true American genius, a master artist. . . . As off-kilter as ever, Dr. No is Percival Everett at his most artfully absurd and ironic, and it might be just the thing to finally propel this star into the literary ether.”—Carole V. Bell, Oprah Daily

“Everett brings his mordant wit, philosophic inclinations, and narrative mischief to the suspense genre. . . . [He] is adroit at ramping up the tension while sustaining his narrator’s droll patter and injecting well-timed ontological discourses on...well…nothing. It may not sound like anything much, so to speak. But then, neither did all those episodes of Seinfeld that insisted they were about nothing. And this, too, is just as funny, if in a far different, more metaphysical manner. A good place to begin finding out why Everett has such a devoted cult.”—Kirkus Reviews, starred review

“If the unexpected always happens in Everett’s individual novels, the variety across the work also astonishes.” —Asali Solomon, The Washington Post

“The latest zany masterpiece from the novelist Percival Everett. . . . This is the fantasy of Black capitalism, and in Dr. No, Everett has given us an antagonist up to the task of representing its delusions—a villain who thinks he is a hero, a savior who shows up empty-handed.”—Jennifer Wilson, The Atlantic

“It is hard to write or even think about his work without sounding like an inferior edition of Percival Everett. . . . One way to evaluate an artist is to observe the quantity and quality of misinterpretation his work begets. By this measure Everett ranks very highly. 'Damn it, I don’t understand it, but I love it,' mutters one of the characters, regarding Sill’s weapon of nothingness. Same.”—Molly Young, New York Times Book Review

“The phenomenally talented and prolific Percival Everett conducts a highwire act in Dr. No, balancing opaque mathematical theory with disarmingly deadpan humor over a daunting crevasse of nothing. . . . The result is an entertaining caper of philosophical proportions. It is an adventure that can be appreciated on any of the numerous levels that Everett is working on, from the unassuming bumbling of a humble mathematician to the provocative consequences of unmitigated power, nothing is quite as enjoyable as Dr. No.”—Dave Wheeler, Shelf Awareness

“Percival Everett has always been a prolific writer, but the past few years have been an epic run even for him. . . . This caper novel will keep you laughing and pondering; nothing will get in the way of that.”—Omari Weekes, Vulture's Most Anticipated Books of Fall 2022