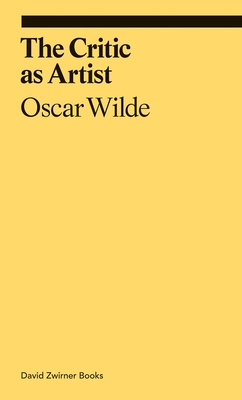 By Oscar Wilde, Michael Bracewell (Contributions by)
$12.95
On Our Shelves Now - Available to Ship to Your Home

In The Critic as Artist, arguably the most complete exploration of his aesthetic thinking, and certainly the most entertaining, Oscar Wilde harnesses his famous wit to demolish the supposed boundary between art and criticism.

Subtitled Upon the Importance of Doing Nothing and Discussing Everything, the essay takes the form of a leisurely dialogue between two characters: Ernest, who insists upon Wilde’s own belief in art’s freedom from societal mandates and values, and a quizzical Gilbert. With his playwright’s ear for dialogue, Wilde champions idleness and contemplation as prerequisites to artistic cultivation. Beyond the well-known dictum of art for art’s sake, Wilde’s originality lays argument for the equality of criticism and art. For him, criticism is not subject to the work of art, but can in fact precede it: the artist cannot create without engaging his or her critical faculties first. And, as Wilde writes, “To the critic the work of art is simply a suggestion for a new work of his own.”

The field of art and criticism should be open to the free play of the mind, but Wilde plays seriously, even prophetically. Writing in 1891, he foresaw that criticism would have an increasingly important role as the need to make sense of what we see increases with the complexities of modern life. It is only the fine perception and explication of beauty, Wilde suggests, that will allow us to create meaning, joy, empathy, and peace out of the chaos of facts and reality.

Oscar Wilde (1854–1900) was an Irish poet and playwright who became one of London’s most popular writers in the early 1890s. Graduating from Trinity College, Dublin, and later Magdalen College, Oxford, Wilde embarked on a hugely successful lecture tour of America in 1882. Two early melodramatic tragedies, Vera; or, The Nihilists (1880) and The Duchess of Padua (1883), were written during these years, paving the way for later stage classics such as A Woman of No Importance (1893), An Ideal Husband (1895), and The Importance of Being Earnest (1895). Wilde also continued to write prose and criticism for popular daily newspapers such as The Pall Mall Gazette, as well as The Woman’s World, a Victorian women’s magazine that he edited between 1887 and 1889. Though often controversial, his flair for journalism and nose for scandal ensured these writings were widely read. His bold essays on aesthetic philosophy, published together in the collection Intentions (1891), were known for their wit and play with motif. Together with his plays and poems, these writings on art remain important and influential meditations of the nature of art criticism itself.

Michael Bracewell is a British writer and novelist who has written extensively on modern and contemporary art and culture. He is a contributor to Burlington and frieze magazines. His recent contributions include essays for Bridget Riley: Paintings and Related Work (2010), The Rise of David Bowie 1972–1973 (2016), and Joy Division (2017), as well as Michaël Borremans: Fire from the Sun (2018) for David Zwirner Books. His selected writings on visual art, The Space Between, were published by Ridinghouse in 2012.

“This reprint of one of Oscar Wilde’s most famous essays, The Critic as Artist is a slim volume filled with the clever man’s personal philosophy about the kind of art created by those who would be critics… fans of Wilde will revel in his humor as he takes on the subject that dominated his life: art.”
— Shannon Carriger

“On every page one finds epigrams and ideas that still have the power to provoke and amuse and engage… As Wilde said elsewhere, one should always have something sensational to read on the train. This certainly fits the bill.”
— Matthew Sturgis

“Vivifying approach to art criticism... The piece that stands most firmly on its own merits is one of the best known: Oscar Wilde’s ever-brilliant The Critic as Artist.”
— David Starkey