Proof of Stake: The Making of Ethereum and the Philosophy of Blockchains (Paperback) 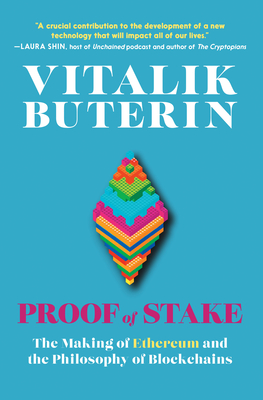 "A crucial contribution to development of a new technology that will impact all of our lives.” –Laura Shin, host of the Unchained podcast and author of The Cryptopians: Idealism, Greed, Lies, and the Making of the First Big Cryptocurrency Craze

“Vitalik Buterin is one of the most influential creators of our generation....Like most of his work, it is sure to become a must-read.”–Camila Russo, author of The Infinite Machine, founder of The Defiant

The ideas behind Ethereum in the words of its founder, describing a radical vision for more than a digital currency—reinventing organizations, economics, and democracy itself in the age of the internet.

When he was only nineteen years old, in late 2013, Vitalik Buterin published a visionary paper outlining the ideas behind what would become Ethereum. He proposed to take what Bitcoin did for currency—replace government and corporate power with power shared among users—and apply it to everyday apps, organizations, and society as a whole. Now, less than a decade later, Ethereum is the second-most-valuable cryptocurrency and serves as the foundation for the weird new world of NFT artworks, virtual real estate in the metaverse, and decentralized autonomous organizations.

The essays in Proof of Stake have guided Ethereum’s community of radicals and builders. Here for the first time they are collected from across the internet for new readers. They reveal Buterin as a lively, creative thinker, relentlessly curious and adventuresome in exploring the consequences of his invention. His writing stands in contrast to the hype that so often accompanies crypto in the public imagination. He presents it instead as a fascinating set of social, economic, and political possibilities, opening a window into a conversation that far more of us could be having.

VITALIK BUTERIN is a Russian-Canadian programmer and writer who co-founded Bitcoin Magazine in 2011 and launched Ethereum in 2014. In 2021, he was named as one of TIME magazine’s most influential people. NATHAN SCHNEIDER is an assistant professor of media studies at the University of Colorado Boulder. His most recent book is Everything for Everyone: The Radical Tradition that Is Shaping the Next Economy. He first interviewed Vitalik Buterin in 2014.

"With this book, Vitalik Buterin establishes himself as the full-stack philosopher of our age — with enormous insight  in political philosophy, economics, game theory, organizational design and, oh yes, technology. If you believe, as I do, that web 3 has the potential to deliver enormous justice and good, this is an essential text. If you don’t understand what that potential could even mean, then this is an essential text. To find such wisdom in this critical field is a relief — and joy."
—Lawrence Lessig, Creative Commons co-founder, Harvard Law School professor, and author of The Future of Ideas: the Fate of the Commons In a Connected World

"Vitalik Buterin is unique in his robust, technical, and perspicacious approach to good intentions. He is one of the principal 'good guys' in the epochal, if uncertain, emergence of a world-to-come in which digital networks become as useful as they ought to be. This book is nerdy on the surface, but read with an open mind it is dramatic. It’s about the quest to figure out how the world can be better. There is no greater game and nothing more suspenseful or more filled with love."
—Jaron Lanier, computer scientist and author of You Are Not a Gadget

"Over the last decade, Buterin has become arguably the core public intellectual on the nonfinancial side of crypto. His new book, “Proof of Stake,” is a collection of long, thoughtful essays that taken together lay out a vision of crypto as a truly transformative technology — one with the potential to revolutionize everything from city governance to voting systems to online identity."
—Ezra Klein, New York Times podcast "Ezra Klein Show"

"Vitalik Buterin is one of the most influential creators of our generation primarily thanks to Ethereum, of course, but also because of his written work, which until now, has come in the form of white papers, blog posts, and tweets. But here we have the privilege of reading Vitalik's first book! Like most of his work, it is sure to become a must-read in the cryptocurrency space, as it dives into the heart of Ethereum—its consensus mechanism—which will be key to understanding the heart of the internet itself as web3 grows."
—Camila Russo, author of The Infinite Machine, founder of The Defiant

"Vitalik Buterin is one of the most important thinkers in crypto. His creation, Ethereum, has been the platform that launched nearly all of the big crypto trends of the last several years. He is also one of the field’s clearest communicators, which is why this compendium of his writing is a crucial contribution to development of a new technology that will impact all of our lives."
—Laura Shin, host of the Unchained podcast and author of The Cryptopians: Idealism, Greed, Lies, and the Making of the First Big Cryptocurrency Craze

“Vitalik Buterin is not only a great innovator, he is also a great and important thinker. The essays collected in this book prove that, and so many of them have more real substance than entire books by many other people.”
—Tyler Cowen, Professor of economics, George Mason University

"I’ve never been more excited about the potential of the Internet, and that’s largely thanks to Vitalik Buterin."
—Alexis Ohanian(co-founder, Reddit), TIME

"[Vitalik] Buterin is an extremely thorough and complex thinker: He’s trying to solve both problems that exist today and those that might exist in 20 years, with regards to privacy, housing, city planning, voting systems, and much more. And he’s still only 28, and growing into his role as a public figure. To me, it seems highly likely that this story only marks the start—as opposed to the peak—of his influence on the world."
—Andrew R. Chow on his March 2022 TIME cover profile of Vitalik Buterin

"Vitalik Buterin, creator of the fast-growing new cryptocurrency network Ethereum, wants to use his technology to disrupt, well, everything."
—Fortune

"[Vitalik Buterin's] vision has become a rallying cry. . . a technological crusade for increased access, transparency, and accountability. . . . A new economy in which anyone can participate on their own terms." —Wired

“I saw him on the commuter train and he was wearing mismatched Hello Kitty socks. . . . And this is the person building the infrastructure that is challenging the power structures of the most important financial institutions out there.” —Wired

"An indispensable voice of authority with a great talent for untangling and explaining the technicalities of blockchain-based cryptocurrencies." —Wired