A Death in Chelsea: A Mayfair 100 Mystery (Hardcover) 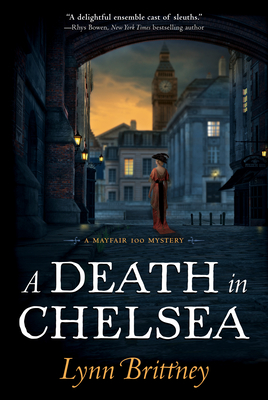 By Lynn Brittney
$26.99
Email or call for availability

This is book number 2 in the A Mayfair 100 Mystery series.

In the dark days of World War I, an aristocrat's suspicious suicide propels a one-of-a-kind crime-fighting team into a sordid world of blackmail, betrayal, and tragic secrets.

When the phone rings at the Mayfair 100 exchange, the news is rarely good, and this time is no exception. The Duchess of Penhere's daughter, notorious society gossip queen Lady Adeline Treborne, has been found dead in her room in what appears to be a suicide--but her family suspects foul play.

The secret Mayfair team of amateur female detectives has been restlessly awaiting their next case, and this will prove one of their thorniest. When Dr. Caroline Allardyce performs an autopsy, she is able to conclusively prove that the woman was murdered. Lady Treborne had made many enemies through her vicious gossip column, so there's no shortage of suspects.

Supported by a cadre of professional police officers, the Mayfair women launch their investigation, but there's much more to this case than meets the eye. As they venture into a world that lays bare London high life at its lowest, the team soon begins to comprehend the danger at hand—and how this tangled web of treachery could ensnare anyone who gets too close.

Lynn Brittney has been a writer for almost thirty years and has written several adult and children's non-fiction books and many plays for adults and children that have been performed all over the world. Her first young adult novel was shortlisted for the Waterstones Book Prize, the Brandford Boase Award and the Doncaster Book Prize. Her second young adult novel was included in the UK Government's Recommended Reading List for Boys and was described by the Daily Telegraph as containing..."furious swordplay, tremendous chases, atmospheric journeys and wince-inducing reminders that this was an age before anaesthetics." This is her second Mayfair 100 mystery and adult novel.

"Impressive...Brittney is as adept at characterizations as at plotting. Maisie Dobbs and Bess Crawford fans will hope for a long series run."
—Publishers Weekly

“To say that Brittney is creative in laying out her plot would not do her justice...But be warned: Once you pick up the book, you won’t put it down until the end.”
—New York Journal of Books

“The surprising interactions among the various suspects make A Death in Chelsea an enjoyable read.”
—Manhattan Book Review