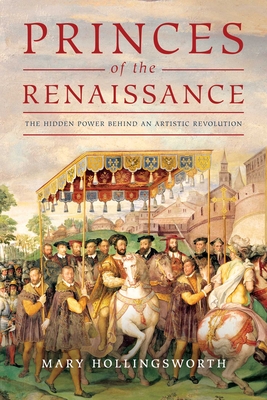 A vivid history of the lives and times of the aristocratic elite whose patronage created the art and architecture of the Italian Renaissance.

The fifteenth and sixteenth centuries was an era of dramatic political, religious, and cultural change in the Italian peninsula, witnessing major innovations in the visual arts, literature, music, and science.

Princes of the Renaissance charts these developments in a sequence of eleven chapters, each of which is devoted to two or three princely characters with a cast of minor ones—from Federigo da Montefeltro, Duke of Urbino, to Cosimo I de' Medici, Duke of Florence, and from Isabella d'Este of Mantua to Lucrezia Borgia. Many of these princes were related by blood or marriage, creating a web of alliances that held Renaissance society together—but whose tensions could spark feuds that threatened to tear it apart.

A vivid depiction of the lives and times of the aristocratic elite whose patronage created the art and architecture of the Renaissance, Princes of the Renaissance is  a narrative that is as rigorous and definitively researched as it is accessible and entertaining. Perhaps most importantly, Mary Hollingsworth sets the aesthetic achievements of these aristocratic patrons in the context of the volatile, ever-shifting politics of an age of change and innovation.

Mary Hollingsworth is a scholar of the Italian Renaissance. She is the author of The Cardinal's Hat; The Borgias: History's Most Notorious Dynasty; and Patronage in Renaissance Italy: From 1400 to the Early Sixteenth Century. She divides her time between Italy and England.

"Mary Hollingsworth’s Princes of the Renaissance is a revealing account of the city-state dynasties that created unimaginable wealth, cut-throat competitions, and lavish displays of patronage, resulting in some of the Western world’s most sublime art. A significant addition to Renaissance studies, and a delicious deep dive for those fascinated by the era."
— Foreword Reviews

Italian Renaissance scholar Hollingsworth has written several books on this eventful era, before tackling this lively chronicle of that land in the two centuries after 1400. Even readers who recognize political names from this period—Borgia, Medici, Visconti, Sforza, D’Este—may be surprised to learn that each family may represent half a dozen individuals. The pantheon of great artists, from da Vinci to Michelangelo, stand on their own, and the book includes beautiful illustrations of their works, with architecture enjoying equal billing as painting and sculpture.
— Kirkus Reviews

"Hollingsworth’s vivid biographical sketches and astute synthesis of the era’s tumultuous politics. The result is an accessible and entertaining introduction to a groundbreaking period in world and art history."
— Publishers Weekly