Walking to Jerusalem: Endurance and Hope on a Pilgrimage from London to the Holy Land (Hardcover) 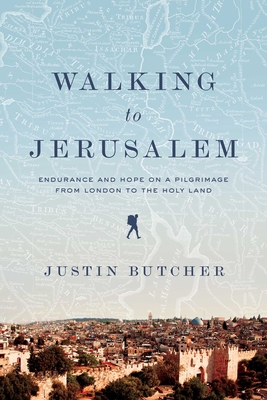 A moving and informative narrative of a six-month walk from London to Jerusalem on the centenary of the Balfour Declarations.

On the centenary of the Balfour Declaration, which was also the fiftieth anniversary of the since the Six-day War and the tenth anniversary of the Blockade of Gaza, Justin Butcher—along with ten other companions (and another hundred joining him at points along the way)—walked from London to Jerusalem as an act of solidarity, penance, and hope.

Weaving in history of the Holy Land as he moves across Europe, from Balfour and Christian Zionism, to colonialism and Jerusalem Syndrome, from desert spirituality to the lives of his fellow travelers, Walking to Jerusalem is a chronicle of serendipity, the hilarious, the infuriating, and, occasionally, an encounter with the divine.

Justin Butcher attended Oxford University and then trained at the Drama Studio London. He has worked all over the world as actor, writer, director and musician and has worked extensively as creative consultant in the business, government and voluntary sectors, across the U.K. and Europe, Russia, the Middle East and Africa.

"A pilgrimage to Palestine brings a message of compassion and understanding. An urgent and impassioned plea for justice in the Middle East."
— Kirkus Reviews (starred)

"A must-read for everyone who yearns for peace in Palestine."
— David Suchet

"Butcher relights the flames of hope in our age of hopelessness."
— Yasmin Alibhai-Brown, author of Who Do We Think We Are

"As an Israeli who campaigns for equal rights, I found in Justin's compelling account a clear sense that peace based on justice and equality is no pipe dream but a real possibility in my tortured land. With Justin as a guide, all of us can begin to walk the walk."
— Jeff Halper, Director, Israeli Committee Against House Demolitions