American Exodus from Nasser's Nile: The Untold Saga of the American Embassy Evacuation from Egypt During the 1967 Six-Day War (Paperback) 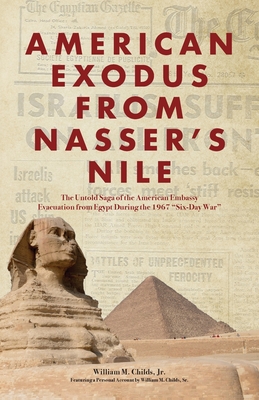 Typically, American diplomat families stationed in foreign countries live a good life. But not in Egypt in 1967. Not when Egypt's President Gamal Abdel Nasser made enemies of Israel, the United States, and Great Britain for his own political gain. Then on June 5, 1967 Israel launched a surprise military attack on Egypt and its Arab allies.

This is a true, untold story about how one American diplomat and his family became part of a major evacuation effort in a hostile country during the now famous "Six-Day War." During the height of the Cold War, the US government was not about to directly intervene, risking confrontation with the Soviet Union. As a result, the diplomats were forced to rely on Egyptian police and sympathizers to escape. They had to travel by train and bus in the darkness of night. One American died.

The details of this exodus have been brought to light here for the first time. William Childs, Sr., US Foreign Service Officer, took the time to write his own personal account of what happened. Then he mothballed it. His son decided to resurrect that story, fifty years later, both in honor of his father's and other US diplomats' courage, and in order to share an important slice of history with a wider public.