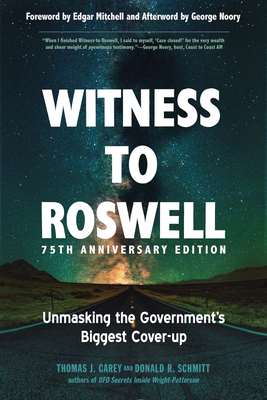 “When I finished Witness to Roswell, I said to myself, ‘Case closed!’ for the very wealth and sheer weight of eyewitness testimony.”—George Noory, host, Coast to Coast AM

This classic in the field of UFOology is filled with hard-hitting eyewitness testimony of one of the most important events of all time: the actual recovery of a UFO outside of Roswell, New Mexico, in 1947. For more than 70 years, government authorities have led us to believe the wreckage was merely a very conventional weather balloon—but the witnesses who were there continue to tell a different story.

Witness to Roswell once again provides a "can't put down" written account of what really transpired in Roswell decades ago. It pries loose the truth the government doesn't want us to know including the revelations of Walter Haut. This edition includes: Clearly, the implications of this information are foreboding. One need only look at the fact that officials now have four explanations for this historic event—but to which one do all the witnesses testify on their deathbeds?

Witness to Roswell once again demonstrates to the world that no statute of limitation applies to the truth: We are not alone.

This anniversary edition includes a new introduction by the authors and additional material.

Thomas J. Carey is a U.S. Air Force veteran who held a Top Secret security clearance. He has spent the last 23 years investigating the Roswell incident and published more than 35 articles about it. Tom has appeared as a guest on many radio and TV shows and contributed to a number of Roswell-related documentaries. Together with Donald R. Schmitt, they have written many bestselling books such as Witness to Roswell.

Donald R. Schmitt is a best-selling author, a former co-director of special investigations at the J. Allen Hyneck Center for UFO Studies in Chicago, and a founder of the International UFO Museum and Research Center in Roswell. He has been interviewed on a number of media outlets including Oprah, 48 Hours, the Today Show, and the New York Times. Together with Thomas J. Carey, they have written many bestselling books such as Witness to Roswell.

Dr. Edgar Mitchell, a graduate of MIT with a doctorate in aeronautics and astronautics, is the founder of the Institute of Noetic Sciences and cofounder of the Association of Space Explorers. As an astronaut, he was backup Lunar Module Pilot on Apollo 10 and 16, and flew as Lunar Module Pilot on Apollo 14. He has spent 35 years studying human consciousness and psychic and paranormal phenomena in the search for a common ground between science and spirit. Mitchell lectures regularly at dozens of conferences across the world. He lives in Florida.

“If even 5 percent of the events described by this book actually happened, it would be Earth-shattering.”
— The Cut

"This book is the closest to the truth about the Roswell Incident you will ever stumble upon. What you have been seeking is the true story, the facts, the reality that the government withholds from you. I urge you, by all means...read on!"
— Paul Davids, executive producer of Roswell, the Showtime original movie

“There is no one on this planet who knows more about the Roswell Incident than these two guys.”
— Larry Landsman, director of special projects for the SCI FI Channel and Creative Executive of The Roswell Crash

“The piece de resistance of Witness to Roswell is the revealed for the first time text of a 2002 affidavit from Walter G. Haut.”
— Forbes

“This is the finest Roswell book ever...well told and utterly convincing. My deepest congratulations on writing an instant classic.”
— Jerome Clark, best-selling author and editor of the International UFO Reporter

“The Roswell Incident remains important for UFO research, and the case remains alive today because of the determined efforts of the team of Carey and Schmitt. Witness to Roswell contains much information from new and credible witnesses who add more weight to the existing testimony and evidence that something extraordinary crashed in 1947. Their solid and determined work is to be applauded and is essential reading for anyone interested in the events of July 1947 at Roswell.”
— Dr. Mark Rodeghier, scientific director, Allen Hynek Center for UFO Studies