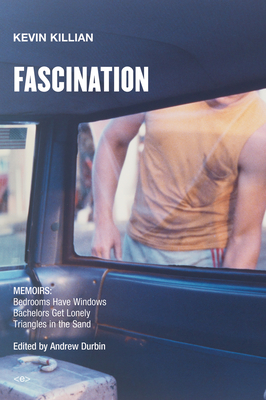 Three seamy, essential memoirs from the most reliable unreliable narrator of our time, and a time capsule of queer and literary becoming. There's something of a lovable Confidence Man about the narrator 'Kevin Killian,' something that enables wild digression, ribaldry, auto-embarrassment, and reinvention, and this collection marks a great occasion to get acquainted with his tell-all generosity of spirit.

A memoir of gay life in 1970s Long Island by one of the leading proponents of the New Narrative movement.

Fascination brings together an early memoir, Bedrooms Have Windows (1989) and a previously unpublished prose work, Bachelors Get Lonely, by the poet and novelist Kevin Killian, one of the founding members of the New Narrative movement. The two together depict the author's early years struggling to become a writer in the sexed-up, boozy, drug-ridden world of Long Island's North Shore in the 1970s. It concludes with Triangles in the Sand, a new, previously unpublished memoir of Killian's brief affair in the 1970s with the composer Arthur Russell. Fascination offers a moving and often funny view of the loneliness and desire that defined gay life of that era--a time in which Richard Nixon's resignation intersected with David Bowie's Diamond Dogs--from one of the leading voices in experimental gay writing of the past thirty years. "Move along the velvet rope," Killian writes in Bedrooms Have Windows, "run your shaky fingers past the lacquered Keith Haring graffito: 'You did not live in our time Be Sorry '"